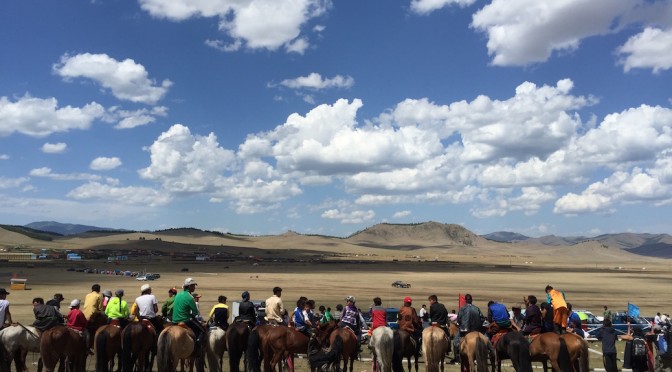 “Do you know the origin of the Chinese words 拍马屁 (literal: slapping the horse’s butt; meaning: flattery)?” Nathan asked us with a big smile while we were watching horseracing at countryside Naadam festival in Mongolia.

Nathan is the historian, trivia master, and joke creator of our family. His favorite book is “Uncle John’s Bathroom Reader”, which is a collection of interesting facts ranging from insects to food to history. It is the perfect book to read while using the toilet to pass time.

“Ahh…now it makes sense,” we were pleasantly surprised.

Nadaam (meaning Game) is Mongolia’s largest and national-wide annual sporting event consisting three main events, horseracing, archery, and wrestling lasting of the course of two days. With the help of a colleague, we found a minibus taxi to take us 30 kilometers to Bugat Sum in the Bulgan Province. Unlike the national or provincial Nadaam fesitival, the Sum or District level festival is small but intimate as almost everyone there participate in the three sporting events in one way or another, rather than just watching. Our group was the only tourist the entire two days there. There was naturally no place to stay for tourists so we camped out in tents on the hill next to the sporting arenas.

“Why is everyone rushing towards that hill?” Olivia asked.

All around us, the locals were either galloping their horses, riding on 4×4 jeep, or running towards the finish line like ants converging at the top of the ant hill.  Far in the distance, we can see horses galloping towards us, with vehicles following and cheering on the horses and riders. Unlike western horse races of 2 km, in Mongolia, the horse first walk 20km out of the town and then race another 20km back into the town. At first we were confused why every race were raced by young boys riding the horses, thinking that eventually teenagers and adults will also be racing in later rounds. But when at the end of the 2nd day, the riders were still boys, we realized that the horse race was really about the winning “horse” and not the rider. Boys were used because they are lighter.

“Look, everyone is rushing towards the winning horse and slapping its butt!” The children exclaimed.

It was a funny scene to see the way the locals surround and congratulates the winning horse by slapping its butt, almost like touching a good luck charm. It felt like they were giving recognition and encouraging the horse through their action. It really brought alive and gave us a mental image of the words 拍马屁.

However, we were even less prepared to witness the slapping of butts during Mongolia wrestling at the Nadaam. We tried to hide our comical laughters and expressions so as not to be disrespectful to this highly regarded sport, but it was futile.

For first time watcher like us, Mongolian wrestling was a juxtaposition of extremes. We saw 32 tall, heavy built, beer belly, stout legs grown men, wearing tiny, tight, cotton, bright blue, red, or pink brief with tiny tight bolero jacket that covered just the arm and shoulder but exposed the chest. Before each wrestling bout, the wrestlers went through a shamanistic ritual of graceful dances imitating rising falcon by flapping their arms and tip toeing their steps as they danced in circles like elephants doing ballet dances. Each wrestler had a corresponding attendant that wore traditional Mongolian outfit and carried the cap of the wrestler.

Every once in a while, the attendant slapped the butt of his wrestler to “encourage” the wrestler to keep going, as some bouts can last 30 – 60 minutes of just tugging and arm locking. When one of the wrestler won by forcing his opponent down on to the ground, the winning wrestler would help the losing wrestler off from the ground. The wrestler that lost then ducked under the outstretched arm of the victor as his butt is slapped by the winner as a sign of encouragement.

“That is so cute!” our couchsurfing friend Kerry giggled every time a butt was slapped.

For the two full days we were there, we were immersed in the local Mongolian culture and the archers even taught Jonathan and the 3 children archery after the match was completed. Every person, old and young alike and even toddlers, that sat in the observation benches were welcomed traditionally with a sip of mare’s fermented milk airag  (2% alcohol) and presented with a plate full of milk curds, goat cheese, sugar cubes, and fresh cream. When taking from the plate, we were asked to first tap the sides of the plate with two fingers. After one sip of the mare’s fermented milk, we can not pass the bowl to the next person sitting next to us. Instead, we need to hand back the bowl for the server to fill it again and presented individual to the next person. Especially in the morning, when the fermented milk was cold from the cool morning temperature, the fermented milk was very refreshing and quenches our thirst from the hot dry wind. One sip was simply not enough! Once Annie secretly took several sips until the bowl was more than half empty. The server saw it but returned a gentle smile as if saying I understand.

While waiting for the opening ceremony, several Mongolian elders sat behind us. We observed that they greeted each other first by giving one firm hand shake then each took out a snuff bottle from his ornately decorated bag and exchanged snuff bottle with the other person. After each sniffed at the other person’s snuff bottle, the process is repeated again with another elders. The smell of each bottle was distinct. I was fascinated because earlier we had seen these snuff bottle displayed at the National Museam but we did not expect to see them still being used. It reminded me of how our dog Paz also recognized and greeted different dogs around the apartment complex by sniffing their butts!

To our surprise, one elder raised his hand for a traditional handshake and handed me his snuff bottle to sniff. The smell was aromatic with a mix of spices. I felt honored to be treated with such respect from an elder.

The two days of countryside Nadaam was an enriching experience for us. Although the custom of slapping butts of grown man and horse was strange for us, but the action of “encouragement” is something that I find very commendable and will remember to heart.

One thought on “Nadaam: A Two-Day Festival of Butt Slapping”