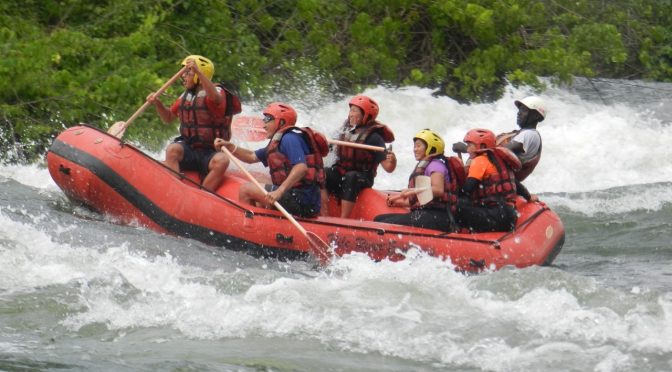 During the election in Uganda, we escaped to Jinja, the source of the River Nile that starts in Uganda and eventually passes through Sudan to Egypt. Along the river is great for bird watching, which we did by hiring a boat.

However, for backpackers, the White Nile along Jinja is known for the best Level 5 white water rafting in the world. And we couldn’t pass up this adrenaline experience especially since the price is half-off due to COVID-19.

I Think I Almost Drowned

“I think I almost drowned,” I told my family when I swam back on the raft after the raft flipped over into a rapid classified as Level 4. “My head was above the water but I couldn’t breathe. Water got into my air pipe. All I could do was to wave for help.”

Afterward, my children told me that I was in a state of shock when I told them I almost drowned. Physically, I felt okay. But mentally I was in shock.

Level 5 is the highest level for amateurs. We didn’t really know what it means to do level 5 white water rafting. We were surprised when we saw four kayaks and one safety boat for just the five of us. After almost drowning at level 4, I realized why.

Every one of us had second thoughts when we saw the level 5 rapid. Some of the waves looked one story high. I wasn’t sure if I should risk my life again.

We felt like the trench soldiers during WWI that was told to charge into the enemy line. There was no escaping death.

The Best Guide Ever

One of the highlights of our rafting trip was undoubtedly our rafting guide, Beyon. He was experienced, full of energy, and funny.

“I get paid to drown people,” Beyond laughed when we asked him how does he like his job. “How much more fun can it get!”

“The hardest part of the job is the language. In the early days, I offended a lot of people. You have to understand, back in 1997, only the wildest, toughest people came to Uganda as tourists. So when I told them to paddle harder, they told me to say “F**CK’IN PADDLE!” Later on, missionaries started to come and I told them to “F**CK’IN PADDLE!”, but instead of laughing they all grew quiet. A few braver ones would tell me, “Juma, that’s not a very nice word to say. It’s probably better to not use it.” But then sometimes after rafting, I would ask people, “How did you enjoy it?”. They would look at me and say, “Dude, that was “F**ck’in awesome!”. I was so confused—he put the word with something good! By far, this has been the hardest word for me to learn😆 (recorded by Olivia)

It was only after we finished our rapids, did we realize that starting from the beginning of the trip, Beyond was “observing us carefully” to decide how challenging or dangerous he will “design” our trip since there are different easier or harder routes that one can choose for every rapid.

First, he had all of us jump into the river to observe how well we swim in the river.

Then for the first rapid, he chose an easier route, where we didn’t flip. Then he announced that “Congratulations, this is the hardest one for our rafting today” to see our reaction. Since we were excited to try level 5 rafting, our faces showed him that we were thinking inside, “that’s all for level 5?”

For the 2nd rapid, although it was level 4, he chose a harder route which flipped our boat. Afterward, he observed that we were not upset about being drowned in the rapid.

For the 3rd rapid, which was level 5, he said that there are two routes. One is the hard one and one is an easy one. He waited to see our reactions. We were excited to finally experience what is level 5 and none of us asked to go the easier route. So he decided to take the hard route which the raft basically had no chance but to be crushed by the waves.

For the other rapids later one, he told us that we an swim through the rapids for more excitement. By that time, after being drowned twice already, we were happy to just ride through the rapids on the boat without flipping over each time.

It was not an easy job for him either as he put himself in danger every time the raft flips. Once, he was trapped deep under the current for 45 seconds. When he finally surfaced, blood was coming out of his ears. Another time, he had a huge cut on his arm. After that, he took two years off before he felt mentally ready to raft again.

Will I do level 5 rapid again?

Just like bungee jumping, I think there is something that you only need to experience once, and then is good to last a lifetime!