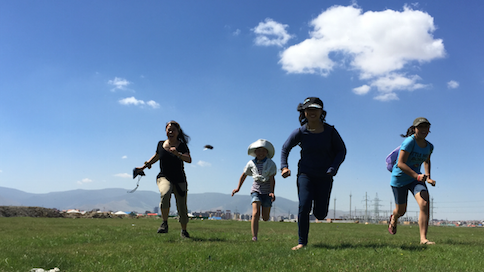 In Psalm 111:4 it says, “He has caused his wonders to be remembered”. Indeed we have seen countless of wonders on this trip—the endless towering Great Wall of China, the breathtaking view of the rap seed flowers of Qinghai lake with snow mountains behind it, and the deep red sun setting behind the thousand years old rock formations at Yadan. But of all the wonders we had encountered, none beats the wonder of people. Each person we had met has greeted us with nothing but kindness, taking us into their own homes, showing us where to go, and going beyond what’s asked for as a stranger and a host. Through the people I have met on this trip, I learned that hospitality is not just a job but also a lifestyle—living is about the “Living”.

We received warm welcomes since the very beginning of our trip, including in Beijing from my dad’s old high school friend, Uncle Noah. Although his bachelor home was no 5 star hotel and an aroma of cat pee permeated the whole place, we received 5 star treatment. During our weekend stay there, he drove us everywhere we went. No matter if we had a dinner appointment with someone or an errand to run, he was there prepared to drive us anywhere. He was even there right at the beginning when we first arrived in Beijing to pick up our luggage as we went camping at the Great Wall the very same day. Like a personal chauffer he attended to our every need, including our need for food. The first morning we were there we woke up to the surprise of freshly homemade shake. He poured us each a whole cup, proudly explaining, “I made it with yogurt, bananas, apples, some corn flakes, and pineapples”. We were all thinking how much work it took to peal the apples, and then cut up all the pineapples, bananas, and apples before it’s ready for the blender, but all he said was “it’s easy, and I make it for myself everyday anyways”. As we were still wooing and ahhing about the shake, we suddenly noticed that Uncle Noah has disappeared, only to find him back 15 minutes later with two big bags of traditional Beijing breakfast. Shocked and spoiled, we happily enjoyed the food he bought us. Little did we know that it was just the beginning. For each following meal, he took us to different places unique to Beijing and paid for them too! Although we were only in Beijing for three days, we felt like we really got to know Uncle Noah better. He told us about his love for pets, introduced us his friends, and gave us a list of his favorite dramas. It felt like he was there every time we needed him as a driver, as a guide, and as a friend. We were treated like loyalty in Beijing and my eyes were opened to a new world of hospitality.

This world of hospitality continued to grow as we arrived in our couchsurfer host’s house in Mongolia. When I say house, I really mean “ger”. His family of six live in one single ger together. Even though they live in Ulaanbaatar, the capital of Mongolia, their lives are simple. They walked their 8 cows to the pasture everyday and still needed to haul water from the river for daily uses. Even their meals were basic with biscuits and yogurt as breakfast and lunch, and salad for dinner. Yet they were the most generous and welcoming family we had ever met—they shared everything. Although space was limited in their 20-meter square ger, they welcomed us in, giving us the best floor spaces inside, while the rest of them squeezed by the door side. Their son, Todo, a very talented musician played for us as well. He shared popular songs like “Let Her Go” and “Counting Stars” on his guitar with us as well as traditional songs on their Morin Khur, the Mongolian traditional instrument. In return, we also performed a few songs on their piano, exchanging tips along they way. Their daughters also left us in awe. Talented in dancing, the three of them gave us quite a show dancing their traditional Mongolian dance one second and then switching to K-pop the next. Afterwards my mom also joined in, showing them her own style of dancing. Just like that we bonded over the week as we walked the cows together, played cards, climbed the mountains, and did the different chores, sharing much laughter during the short 3 days. None of us wanted to leave when it was time to go. They were my first goodbyes on this trip that reminded me of my home: the kind of goodbye that makes you realize both the joy and pain of friendship—the kind that are worth it no matter what. Regardless of what they have, they shared everything with us—they shared life.

When we arrived in lake Khovsgol for our work-away program, it was our turn to be the host and serve and care for the tourists that came our way. We were working at a “ger camp” where it provides gers and meals to travelers who come to the camp looking for accommodations. At the same time working there was a German girl, Nellie, who was also doing work-away. And no one worked as hard as she did. Since the owner of the camp was often away, she rose up and took charge. She woke up at 6:30 every morning and worked all the way till 12:00 at night. She made breakfast, did the laundry, hauled water, gathered firewood, and washed the dishes, doing everything she asked us to do and more. Watching her work non-stop was an inspiration to us all. Even though we were tired and were tempted to complain, we didn’t and we did our best to do everything that needed to be done. One time Joani and I took on the task of washing all the sheets from one of the ger after the guests left. We had to soak it, hand wash the dirty spots and ring out all the excess water. It took us more than two hours, but we did it anyways. After all, Nellie does so much more so the least we can do is help to decrease her workload. During this time we even got to set up a volleyball court and a campfire place which were some of her side “projects”. I realized that even though everything we did was suppose to be for the camp, we really did it for Nellie. Following her leadership and seeing the way she worked, we wanted to work too. We were working for Nellie, to help her with the chores, to make time for her to relax, and to love her through our actions. It is the person that matters. When we saw the fireplace and the volleyball court, what we really saw was Nellie’s face. I realized working is not about the job itself but about people.

One thought on “Living is About the “Living””