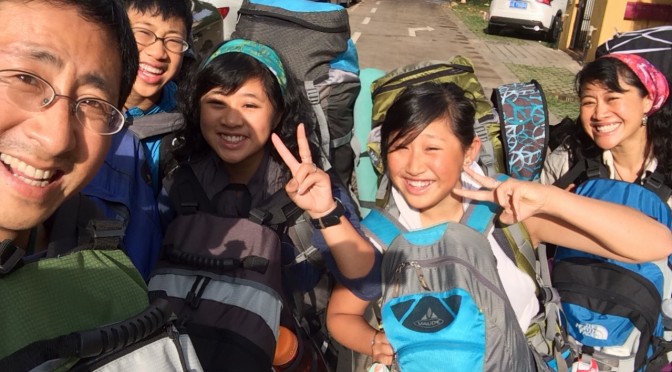 For this gap year we can only bring a big backpack on the back and a small one in the front. Packing and leaving Kunming was hard and long.

On June 5,2015 we had a trial pack. I started to pack from 3 in the after noon all the way till 9 at night. It took so long because I had to figure out what to bring what not to bring,if I took too much or not enough. I had to pack wisely because I know I’ll be carrying  all the stuff for a whole year and two months. Moreover, when all the clothes had been decided, I had to fit every thing in both backpack, that also took a while. In the end my big backpack weighed 13kg, and my small backpack weighed 5kg.

On the last day before we leave for the train station was a mad dash for everything. Cleaning the the house, bike, and rooms, everything was a mess. We were all panicking because we were late, and my brother Nathan also hadn’t finish his home work yet. After all that panic we got to the train station, however while we were in line waiting for the ticket, they shut the line down, and created more confusion. In the end it took us a long time to get our ticket and finally went to our cart,beds and settled in for the night.

It’s was hard for me to leave Kunming  because I felt like I was leaving my life behind and never coming back, however I know I will be back and I’ll be able to blend back into life eventually.

In the end leaving Kunming was a very busy, hard, long, mad dash day. However I feel more and more excited as we were going to Xian.