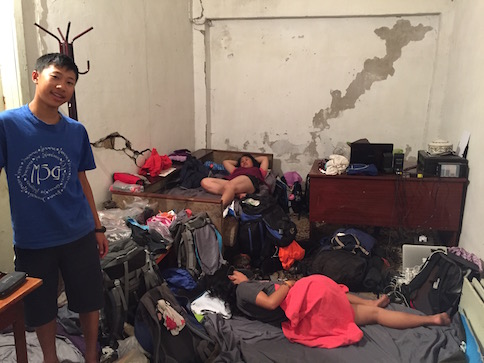 “Dad I don’t want to stay here, it’s like living in a cave!” This was the place where my dad choose to stay after three days of camping. We were expecting to have good living conditions once we got back to the city, but instead we got The Cave. Living there was an interesting and new experience.

This year we got to be couch surfers for the first time. On this gap year, my dad really wanted to be hosted at least once in each country. Thus, the only one who accepted us was a couchsurfing host from Bishkek Kyrgyzstan. However, his apartment already had five couch surfers. Subsequently, he offered us his office and in our terms: “The Cave”. That’s how we stayed in Bishkek for three days, zero cost for accommodation.

The cave was nice in someways, but terrible in others. A bad thing about The cave is the space. Before we even unpack it was already messy looking because there were so many backpacks. Then at night we kept on fighting because the space was so little that we kept touching each other when we slept. Another thing was the sink. There was no sink at all. We only had a hose to bush our teeth and wash our face. Moreover, the hose was right above a sewer! When you brush your teeth, you will have the constant fear of dropping things in the sewer. Also, when it’s dark you might accidentally fall into the sewer too! The bathroom is also an outhouse and there wasn’t really a door either. At the The cave you also can’t shower.

Nevertheless, there were nice things about The Cave like the wifi. Since The Cave was at an abandoned building, there wasn’t much people using the wifi. Thus, the wifi speed was amazing! We even watched more than one movie a day, which doesn’t happen often! Another thing that made this place bearable was the puppies. They were the most adorable things ever because for one, I really love animals. Thus, if were we live have animal, I would enjoy the place even more. However, the mother likes people’s attention, so you had to pet the mother while playing with the puppies. Lastly at The Cave we actually had a routine, that way every thing was more organized and doable. This is how we managed to live at The Cave.

Even though it’s wasn’t the best living place but it was livable. I think after this trip I will be able to live with any living conditions.