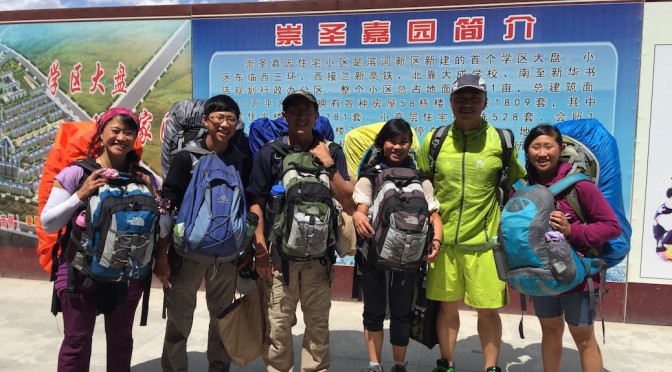 “Where are you from?” a stranger asked.

“We are from Taiwan,” Olivia answered.

“But you speak English so well.”

“We speak English at home.”

“Why do you speak English at home?”

“Because my mother is born in Canada, my father grew up in the US, and I was born in the US.”

“Then why is your Chinese so good?”

“Because we lived in China for 14 years and my youngest sister was born in Kunming.”

Every day on the Silk Road in Gansu, strangers would come up to us and ask these same questions over and over again. Maybe it was because we each carry a big backpack with different colored rain cover. Maybe it was because we are a family of five with three children, a rarity in China. Maybe it was because we speak Chinese and English at the same time, often mixing them in the same sentence. No matter what were the reasons, the result was that we have been mistaken for being Tibetan, Uighur, Inner Mongolian, Indonesian, and Singaporean. We visibly felt people stared at us with puzzled look and many strangers had simply come up to  take a photo with us.

“You know, if I saw ‘us’ walking down the street, I would probably stare at ‘ourselves’ as well!”  laughed Nathan.

During the trip we often debated whether we should reply to strangers that we are from the US, Canada, Kunming, or Taiwan. We finally decided that the best answer while in China would be that we are from Taiwan because it is less complicated to explain. Only if the stranger continue to ask then we will give a little more details bit by bit, like we lived in America before, which explains why we are speaking English.

Once we took a taxi ride in Jiayuguan, Gansu. The taxi driver kept staring at us as the children spoke in a mix of English and Chinese. Sitting next to him, I can feel that he was very confused and could not figure out where we are from despite probably having seen countless number of tourists as a taxi driver.

Finally he could not hold it in any longer and asked the familiar question, “Where are you from?”

I gave the taxi driver the standard answer of “We are from Taiwan.”

There was a visible sign of relief from the taxi driver as he responded, “Ahhhh! You are Taiwanese. Now I understand. I kept thinking where you are from but could not figure out. Now I know.”

It was funny to us that he did not ask why Taiwanese can speak English. Maybe for many people here in Gansu, Taiwanese are a mysterious ethnic group and knows little about the languages of Taiwan.

A common reaction we received from strangers after knowing we are from Taiwan is to ask “where are you originally from?”

“Our ancestors are from  the province Taiwan,” I would answer.

“Did they move to Taiwan during the Liberation of China?” strangers would ask again.

“No, our ancestor has been in Taiwan for hundreds of years.”

We were amused that for many people, they could not grasp the concept that our ancestry can be from Taiwan and does not have to be from a province in mainland China.

At the night market in Jiayuguan, we were enjoying juicy flavorful pieces of lamb kebob when we noticed that there were 3 uneaten pieces of leftover lamb kebob. We kept eyeing those pieces of precious meat salivating over them since we usually under order food than over order. When the restaurant owner was about the clear the table, for the first time in my life, I suddenly asked the owner, “Can we have those leftover?”

To our surprise, the owner said, “Yes, you can.”

The children shriek with joy at the unexpected blessings. Before we had finished those lamb kebob, to our even greater surprise the owner brought more leftover potatoes from the other tables.

Thinking back, we must had been a strange sight for the restaurant owner. A family with three children usually means the family is wealthy because one has to pay a very large fine to have three children in China due to the one child policy. But here is a ‘wealthy’ family that is asking for leftovers and seems to enjoy the leftover food more than the food we paid for!

At the museum inside the Jiayuguan Gate in Gansu, we paid for a guided tour as we also did in other museums. I was surprised at how excited the children were so interested in all the exhibits in the museum, unlike when they were younger. The museum guide spoke very fast as if dictating from a textbook and using all sorts of Chinese idioms.

Seeing our puzzled look, she paused very often to ask, “Do you understand what I just said?”

“Not really,” we sadly admitted. “Can you speak slower?” Then she repeated the same information again.

Similar to our experience before, half way through the tour, our museum guide had a confused look and had to ask the same familiar question, “Where are you from?”

“We are from Taiwan,” we replied using our standard formula.

“I have led many tour groups with people from Taiwan but…..you seem different from them.”

“Is it because our ‘culture is low’ (文化低)?” I responded, guessing that she is surprised that we knew so little of Chinese history and that we couldn’t understand some of the most common Chinese idioms.

“No, no, no,” she felt embarrassed for implying that we are not educated. “It is just that…” she stopped half way not knowing how to describe us.

After leaving the Jiayuguan Museum, we laughed to ourselves that we must be one of the most strange Taiwanese group she had led, as we weren’t really Taiwanese, nor American, nor mainland Chinese — and she is right! We really don’t fit any stereotype. What nationality of tourist would travel for a year carrying large backpacks with three school aged children on the Silk Road!

After visiting the museum, we headed to the actual Jiayuguan Gate. During ancient China, Jiayuguan Gate represented the symbolic western end of the Great Wall and the gateway out of China to the far foreign western regions. Walking on top of the walls, we saw to our left was the high mountains of Tibetan-Qinghai plateau, Qilian Shan. To our right was the Hei Shan. There was only a 15 kilometers opening between the two mountains where all the ancient travelers from West and East must pass through. Naturally, it was a place where different peoples, religions, and cultures mixed and where people must have asked each other many times, “where are you from” and “where are you going”.

When we reached the most western gate of Jiayuguan complex, the portal to the foreign land far beyond, Olivia had an idea.

“Why don’t we take a photo at the gate with our passports? The gate is like the border custom office of the past.”

As we took photos with our passports with different poses, I noticed a bearded man wearing a tattoo mimicking tight shirt selling pieces of uncommon looking papers. Upon closer inspections, we noticed that he was selling ancient equivalent of passport with official stamped visa to leave ancient China. The paper contains calligraphic writings stating that the bearer of the official paper has permission to leave China to 36 foreign lands.

We usually don’t buy souvenirs as we don’t fancy carrying it for a whole year, but we couldn’t resist buying this ‘official’ paper because it represents exactly what we are about to accomplish.

“How much is one paper?” I asked

“There are different prices, RMB 10, 20, 30, 50, 100,” the assistant replied, showing us the differences between the cheaper ones which are just printed paper and those that are written by hand.

“We will take the RMB 10 one,” I told her as we usually go for the cheapest no matter if it is food, accommodation, or suveniors.

“Please write down the name for our artist to write in the blank space on the paper.”

“So your name is Su Jia Wu Kou? What about your wife’s name since there is space to write name of two persons.”

“No, please just write 苏家五口,” I corrected her. We are a “FAMILY” of five people.

Apparently, the assistant had trouble grasping the concept that a family can be five people, and not three people due to China’s one child policy. We get the same reaction often when people see five of us with our big backpacks: “Are you a tour group?” Similarly, people has trouble picturing us as a family with three children so naturally assume we must be a tour group of five.

After the assistant finally understood what we wanted to do, the paper was passed to the master artist to write in our name.

“No, I can’t write that,” the master refused. “It does not make sense! The space is for at most two names and 苏家五口 is not a name.”

To our surprise and admiration, the artist is quite principle minded and he will not sell what he is not proud of.

“Look, I will give you the RMB 20 paper for RMB 10 price so that I can write the name properly,” the artiest decided.

What an unexpected favor!

When we passed through the gate, instead of the busy, bustling city of Jiayuguan which we were in, the land outside of the western gate was a barren wasteland. At that moment, with the official ancient passport in my hand, I felt the same way as those ancient travelers — our journey along the Silk Road was about to begin!

4 thoughts on “Where are you from?”