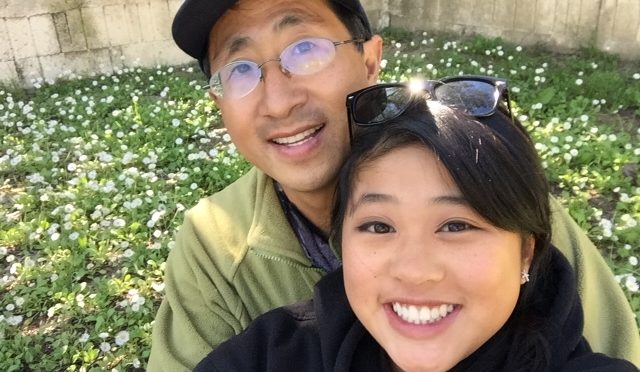 Relationships don’t happen over night; they are built. My dad and I learned this the hard way through years of practice and patience. Perhaps it was because our personalities were so similar, or how we are both so stubborn, I butted heads with my dad a lot when I was little. We fought from little things like when to say “please” and “thank you”, to the correct standards of being “fair”, to bigger things like how long I should be enrolled in Chinese school. However, through these cross fires we learned to give and take, understood each other better, and realized how to give love in a way the other could receive. He became my friend. Through our time brewing relationship, my dad has gradually become my adviser, playmate, and comforter, molding himself into someone I’m comfortable with—my comfort zone.

Through out the years I learned that my dad may not be a man of many words, but every word he does say counts. I know that he thinks before he speaks, is wise and knowledgeable and every bit trustworthy like an adviser. As a result, I go through every decision with him. From which course I should take, to my college applications, to what direction I might want to go in the future, I like to get his opinion and make the decision “together”. There was once I was trying to decide whether to take AP Psychology or AP Biology. One took only one period and the other took two, one earned more credits and the other did not, one costed more and the other less, and one I was more interested in and the other more tedious. I just couldn’t decide. My dad suggested me to write a list of pros and cons and I did; he advised me to just pick one since it won’t matter in the long run, but I couldn’t. In the end I was in tears and my course schedule was still a blank. Finally, he had a solution—we would flip a coin for it: if it’s a head, then I’ll do AP Psychology, but if it’s a tail, then I’ll do AP Biology. I was shocked. Leaving things to chance did not sound like something my dad would do, but he just said, “Trust me”. It ended on AP Psychology and my dad told me to just go rest and we’ll talk about it tomorrow. When the next day came, he asked how I was feeling.

“And do you feel restless about your courses still or do you feel okay and have peace about it?”

“I feel okay and I feel pretty peaceful.”

“Great! You see, often if it was the wrong decision, you would keep thinking about it, doubting yourself and feel restless. But since you have peace about it, it was the right choice, or at least it’s not the wrong choice.”

I was mind blown. This was the first time I encountered making hard decisions this way and I was so thankful to have such a wise adviser to show me how. But my dad taught me a lot more than just how to choose courses. He also taught me how to live life. Through watching him live his life, I learned that big dreams are not as far as they seem; if you just take one step at a time towards your goal, nothing is impossible. That’s how he made moving to China a reality and our one-year trip a dream come true. More importantly, I learned that I don’t have to follow the “normal” patterns of life and run the rat race, nor do I have to be a typical Asian and be an engineer, a doctor, or a lawyer. I just have to be myself and follow God’s calling for me wherever that might be. Money is not a necessity, and even a stable life may not be necessary, because God will always provide. His life is a living example for me and like a true adviser whenever I have doubts he would be there to listen and assure me or point out something I didn’t see before. I trust his opinions; I trust his advices; I trust him. 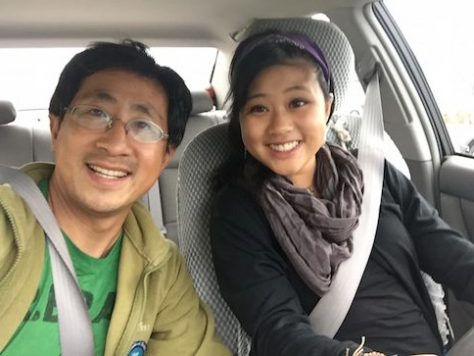 My dad may be serious when he is giving advices but when it comes to having fun, he is the life of the party. In our house he is the party central, the one with all the ideas, the one who makes fun happen—our biggest playmate. Every night for our family time, we would either play a game or watch something. Usually it’s the kids who want to play just “one more game” or watch just “one more episode”, but in our case it’s my dad, especially when it comes to Korean dramas. Often I would be the one saying it’s late, I still have homework, and I need to go to bed, while he would be the one saying it’s not fair. He still has time before bed. How about just one more? Then we would argue, fight over the remote, and even have full on wrestling matches (with me usually emerging as the winner because I would get my siblings on my side). Even though I complain about his lack of self-control, I appreciate it too, in some aspects. His enthusiasm adds much flavor and excitement to an otherwise boring night. And his at times child-like behaviors makes things fun and makes our house a much livelier place. He is also the one that pushes us to go out more. Whether it is exercising and doing Pilates, or playing sports like joining soccer or basketball, or outdoor activities like hiking and biking, he is always at the front line urging and leading us on. He is the epitome of “work hard, play hard.” With Dad in the house, life is never boring. I’m thankful to have a playmate like my dad.

Some things came easily for my dad like teasing people and making things fun; others things like comforting people came with time and practice. He wasn’t a natural at saying “sorry” or saying the “right” sweet things at the right moment when he first began as a dad, but now after 20 years of experience, he’s the comforter I go to when I’m feeling blue. Most of the time it would just be me bawling my eyes out and slowly spewing my frustrations, while he would sit there and listen silently. Even though he does not say much, I see the burrows in his brows and I know he is listening. He understands. Once when we were in Salzburg, Austria, I had a total meltdown. At that time we were couch surfing in a one-bedroom apartment that covered 25 square meters. Our host was very kind and welcoming and gave us the only space he had which was a 2 meters wide couch. We were grateful. Still, with the five of us sharing one single couch, all our luggage sprawled out on the ground, rock music playing in the back ground, and no place to hide, not even the bathroom because everyone took turns at it, I was at my wits end. So, when I found out that for at least the next 7 days we would be either camping or staying with someone else and deprived of private space, I told him flat out: “No. I can’t do it. I’m not sure I can survive this.” However, his response was far from what I needed: “You went through all this trouble to ask me about our travel plans just to see were we would be staying? I thought you were interested! You have no idea how much work I put into planning all this and to make everything work. I’m already trying my best and no one appreciates anything I do. No one knows all the effort I put into researching everything!” and then he stomped off. I was hurt.
I realize how much work he has put into making this trip as comfortable, affordable, and exciting as he could, but he has no idea how I feel, how hard it is to have my heart beat double the speed because I’m too nervous and am getting claustrophobic, how difficult it is to sleep beside my sister who keeps complaining there’s not enough space, how depressing to fall asleep as a wreck and wake up feeling the same. I gave up, sat down on a bench and cried. My mom came over to comfort me and ask if I was alright, which helped a little, but I was still a mess. I wished that my dad would come back instead, and after twenty minutes, he did. He sat down and I told him how I think I know how he feels—he has put in a lot of effort into planning and when we are all sleeping he is still up researching and making sure we get all the connections. We may feel it’s hard for us to travel through countries so fast, but because we are traveling so fast, he’s the one who has to double amount of the research too. It’s tiring. He nodded in agreement. Then I explained about how I felt and why it’s been so hard on me. As he listened, he scooted closer and put his arm around me to give me a hug. After a while he said, “I see. I understand better now.” At that moment I knew we forgave each other for the blow up and he cares about me just the same. Then he gave me a big hug, which was just what I needed. He never did need to say much, but some how every time he finds a way to comfort me. Because he listens, he understands, and because he understands he can comfort me. 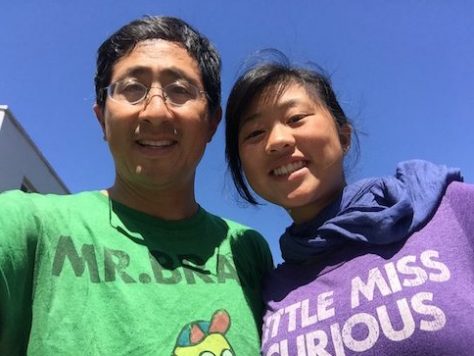 My dad is my adviser, my playmate, and my comforter. Whenever I have a problem, he’s the one I go to for advice and guidance; whenever I’m bored, he is the one I find to take a break and relax; whenever I’m down, he is the one I rely on for help and comfort. With him around, I don’t need to worry, entertainment is planned for me, and my frowns turns to smiles. Even though life can be hard sometimes, who he is to me has made my life safe, fun, and comfortable. He is my comfort zone. Now, as I take my first steps to leave home and start a new life, leaving my comfort zone behind is going to be the hardest. But as my dad has taught me, God is the ultimate refuge, and I know that as I say goodbye to my dad, my Father in heaven will make Himself my comfort zone. 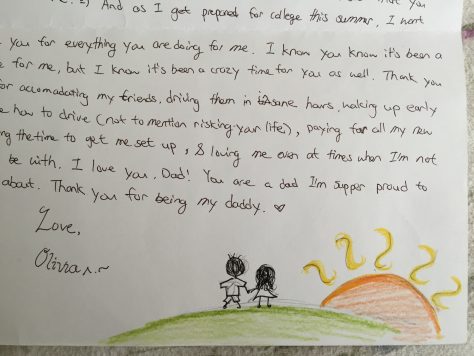 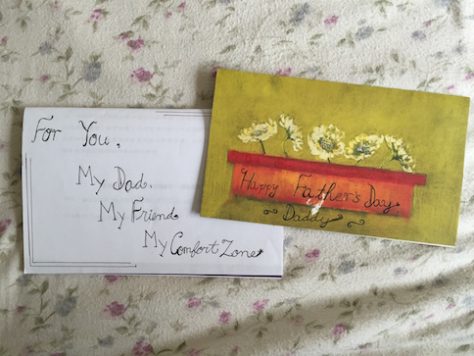 2 thoughts on “Dad, My Comfort Zone”