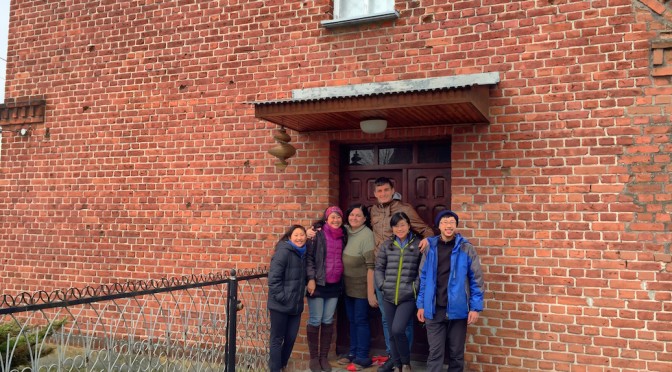 “Wystarcz, Wystarcz,” all five of us cried out in unison and pointed to our stomachs trying to show how full we were.

“Dobry! Dobry!” responded by a motherly figure with a powerful voice and uninhibited laughs.

We were sitting around the dining table in a brick house more than 100 years old in a small town called Lag in northern Poland. At the head of the table was Maria, a 60-year old stocky Polish mother, busily bringing dish after dish of traditional Polish delicacies such as the white sausages, pan-fried breaded chicken fillet, pork salami, chicken noodle soup, pea & carrot salad, boiled potatoes, rice with raisin white cream, apple soda, apple juice, and cheese cake with sour cherries. There was a lot of gesturing and facial expressions from both sides because we couldn’t speak Polish and she couldn’t speak English. Many times we had to resort to using Google translate that took more than 15 minutes just to get a sentence across. At one time, the Google translated a sentence to “Vodka makes you fart”! Fortunately, most of the time, Agnieszka helped to translate for us. She is the sister-in-law of Szymon and Ania the Polish world cyclists who welcomed us to his mother’s home.

“It is not good,” translated Agnieszka for Maria, who shook her head and shrugged her shoulders to communicate her feeling about the rice dish. “Szymon told me you would like rice, but I don’t know how to cook rice.”

Szymon and Anya, whom we hosted in China when they biked through Kunming, were two amazing world cyclists whom we got to know and love. By coincidence we also met them in Vietnam, Mongolia, and Kazakhstan while we backpacked. We arrived at Syzmon’s family home to meet his mother and to pick up a station wagon that they were so kind to lend us for us to drive in Europe since they were still on their epic biking journey. This gift was way beyond all that we had hoped for or imagined.

Beforehand, Szymon cautioned us that his mother has difficulty walking so she would not be able to be so hospitable to us when we arrived. I thought that she would be lying in bed while we helped to bring tea or food to her during our stay there. Little did I expect to see her standing in front of the house beckoning us to come in when we arrived on the first day. She showed us to our room and immediately brought us coffee, tea, and cakes to welcome us. For the next three days, we were pampered and loved by Maria, Agnieszka, and Robert, her youngest son that just came back from England for a short visit.

“I never thought that staying in Poland would be like staying in our own parent’s home,” Annie shared afterwards with joy and happiness. “It’s so nice to be treated like her own children and to have home cooked meals.”

“Polish food is very comforting for the Chinese pallet which craves for pork. I like the way they season their pork and they are actually world famous for their sausages,” Annie concluded.

“Those sausages were incredible,” Nathan added with a big smile as he recalled the taste.

“Now we know they deserve it!” Joani agreed.

“It was really nice to see Ania’s twin sister. It was so cool because it feels Iike Ania was there,” Joani said excitedly. “She’s so smiley and always laughing. And the mother was just so passionate! It was nice with Robert because he can speak English really well. He was so hospitable. He bought so much!”

“He bought twenty beers! Four of each type for us to try,” Olivia recalled. “Afterwards, dad just said, ‘I got to go to bed’. I would love to see him in London.”

“He’s very unique. He won trophies in chess and dancing, studied linguistics, and working in a sushi restaurant in London. Those are very different,” I shared.

If the first place was like our parents’ home, our next destination in Poland, Warsaw, was like coming back to our own home.

After driving on the newly borrowed car, we arrived and stayed with my MBA classmate, the Meyer Family, who has four children, Alexandra, Severn, Karina, and Max, ages 18, 16, 13, and 9 respectively, almost identical ages as our children. They were similar to us as TCKs (Third Cultural Kids) who had lived around half of their lives in California and half now in Poland. Our families had not met in more than 16 years so it was a blessing to catch up on our lives and to spend time together. Chris and his wife Agnieszka both took time off from their work to show us their town and Warsaw, where we visited the Polish Jew Historical Museum, Chopin Museum, and Ujazdow Park and joined a free walking tour of the old town Warsaw. At the Polish Jew Historical Museum, we finally got to fill in the gap from our visit in Israel about the history of Jews between 1st and 19th century. It was there that we happened to have a photo next to the new Polish president who was also touring the museum!

“When I was with their family, I really miss home. I actually cried,” Joani shared. “The dynamics and what they do everyday is just so similar to our lives. It was interesting to see the dynamics between the parents and the kids because they are all pretty near our ages.”

“It’s kind of like they have an ‘on’ and ‘off’ button for being American,” Nathan analyzed. “When they talk about certain things, they sounded very American. When they talked about Polish things, they are very Polish.”
“Now I know I don’t really listen to that loud of a music,” Joani said happily as she thought about how Severn was blasting the music so loud that you can hear it through his earphones. “I was listening to his music and thought, ‘Ha, ha’. Now you know how easy you have it, dad.”

“When Agnieszka told us that each of her kid is different, I didn’t believe her. After I saw their rooms, I believe her!” Olivia recalled. “It was like a movie scene.”

“You have a dad that flies home on weekends and a mom that stays home but tutors everyday,” Nathan set up the scene for the movie.
“You have the talkative, happy, peppy young son, the teenage’ish’ shy daughter who’s going to be so popular in America because she is sporty, pretty, and has a Polish accent, the typical punk, rock brother who likes metal, and the stressed out but friendly older sister who is getting ready for college life who feels more comfortable talking with adults than peers. Each of them are so different from each of us, yet also same.” said Joani.
“So do you think we are normal or abnormal?” Joani asked.
“Seeing that Joani is picking dad’s ear wax while asking the question, I think the answer is clear!” Olivia laughed and we all joined her in a long chorus.

After Warsaw, we drove excitedly to Katowice, where we stayed with an amazing cyclist family whom we hosted in Kunming exactly three years ago. Andrz & Ewa cycled 5000 kilometers from China back to Poland with their 3-year old daughter Marta. Now, they are a family of four with their one year old son Mateusz, who was the cutest and smiley toddler we have ever met!

“I am so impressed with you,” said Andrz after he welcomed me to his apartment. “Your email three years ago said that you are planning to come to Poland in March 2016. Here you are in March 2016! Do you have any suggestion about buying stocks?”

“Ewa and Andrze are so thoughtful,” I shared with the family afterwards. “They thought ahead of time what Polish dishes that we would enjoy for each of the meal and prepared them ahead of time for us to enjoy during each meal. They even thought about how we would miss Chinese food and treated us to a wonderful Chinese meal where we got to use chopsticks and eat rice out of the bowl!”

“I think we definitely got fat,” Olivia concluded. “Let me tell you how the Polish eating schedule works: Breakfast, tea time, second breakfast, tea time, rest, dinner (Polish late lunch around 5PM), supper (Polish late dinner around 8PM), and sometimes you have some beer party or chip party or some tea again! It was everyday and everyone was so nice and gave us so much food.”

“Same with Szymon’s mom. So much food!” Nathan agreed.

“In Poland, we actually really had a food tour, Joani reflected.

“But it was a nice part of Polish culture that we got to experience. If we didn’t stay with our friends, I don’t think we would have realized the way they eat. We would just have two meals like we always do,” Olivia laughed.

The first day we arrived, they showed us the highlights of their city, while we showed them about the fun of geocaching (see geocaching.org). The second day, we visited the Auschwitz Concentration Camp that we had learned so much about from the Holocaust Museum in Israel and the old town of Krakow which was untouched from WWII. Later we went on the Old Town tour of Krakow and had just enough time to watch the 2nd half of an ice hockey game to expose  Olivia to Canadian culture before she goes to Canada for university. And on the third day, Ewa took the day off so that their whole family can take us skiing at their favorite ski resort. The children were so excited to ski, especially Joani, that they couldn’t stop talking about it either beforehand or afterwards.

Afterwards Andrz shared, “We also know what it was like to travel for a year. So we wanted to make you feel at home.”

For the first time on our one year trip, we stayed with old friends in three different cities while we were in Poland.

“In Poland, our time were split. Half with friends and half with touring,” Olivia reflected. “We spent as much time with our friends as touring.”
“Syzmon and Ania’s place was more laughty, funny. Meyer’s was more a relaxed while going out time. And the Andrz was remembering old times and making new times,” Joani summarized adeptly.

Before Poland, it never crossed our mind that Poland would be remembered as a ‘home away from home’. We really saw in action the proverb of ‘you reap what you sow’. We hosted Syzmon & Ania and Andrz & Eva in China, and we built relationship with the Meyers at MBA school. Now in Poland, we were so loved and cared for. Not only did we reaped what we sow, what we sowed multiplied many times over!