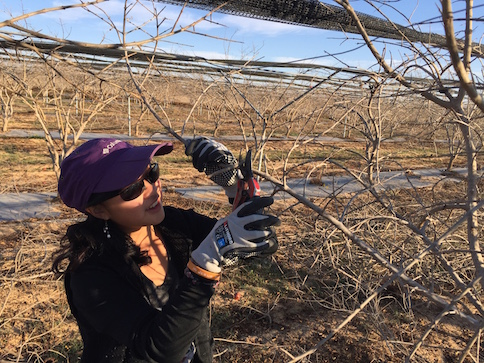 “Boom!…Boom!…” the earth trembled with hollow echoes from a distance.

Wide-eyed with disbelief, I stared at Steve. He didn’t say anything more, and so I kept silent.

I whipped my head around again and asked, “What is that sound?”

Before I even had a chance to respond, a loud noise boomed from the sky overpowering all conversation. Four F-161 fighter jets streaked right above us in a straight line over the orchard.

Steve looked me and smiled: “Don’t worry, you’ll get use to it.” 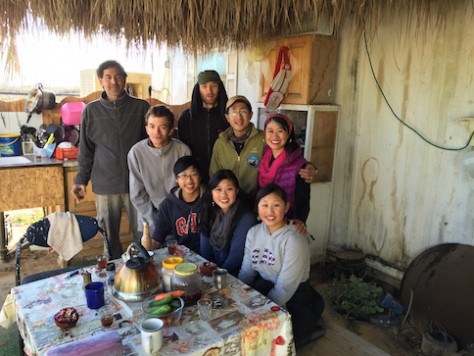 I believed him. After all, I did somehow end up volunteering to prune pomegranate trees in the middle of the Negev Desert, nestled between the Gaza strip and the Egyptian border. What was there not to believe? I was on my Gap Year trip traveling along the Silk Road with my family. My dad always had a knack for finding adventures. When he told us about a farming community that was developing parts of the Negev Desert back into farmable lands, we couldn’t wait—free room and board and they’ll even teach us how to prune the pomegranate trees!

Next thing we knew we were in the middle of the Negev Desert 1km from the Egyptian Border, 5km from one of Israel’s military base, and 20km from the Gaza Strip. We found ourselves living out of a newly built mud house and an old RV, working amongst an American writer seeking for inspiration, a Corsican Jew who hated religion, a Cohen Jew who cared more about sustainability than being the direct lineage from High Priesthood of Judaism, and a Russian Jew who was looking for answers. 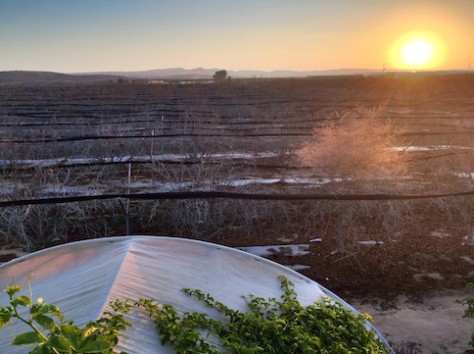 On the first day at 7 am, I was handed a pair of clippers, safety googles, a bunch of thick rubber bands, and a pruning shear. Following Steve, the Russian Jew, who was instructing me for the day, I walked along rows after rows of pomegranate trees. They all seemed trimmed and orderly. Each tree only had a few main branches tied down to the wires beside it and there were only a few stems and twigs in between the branches. After 10 minutes, we finally stopped. I stared at the tree. It looked like a lunatic’s hair gone wild! There were branches growing in every direction: some pointed straight towards the sky, while others crisscrossed, tangled around each other, many poked inwards right through the heart of the tree, and still others dangled all the way to the ground extending like octopus legs. It was a mess.

“Where do you even begin?” I asked.

I think Steve sensed my anxiety but he carried on calmly.

“First, you should gently feel the tree trunks,” he demonstrated as he knelt down beside a pomegranate tree, “And brush away all the dirt and snails. If you find a snail, you must kill it. They are the worst pests you can imagine.” I nodded as I dutifully cut a snail in half with my pruning sheaths.

“We need to make room for the fruit, so we must cut away all the excess branches. You see here? We don’t need this one.” And he chops off a whole branch from the trunk with his clippers and pulled it away. “Isn’t that much better? We want to create a “well of light” that comes straight through the middle. This will ensure that each branch gets adequate sunlight.” Indeed, with that branch gone, I can finally see what’s going on in this jungle of crisscrosses and prickly maze. 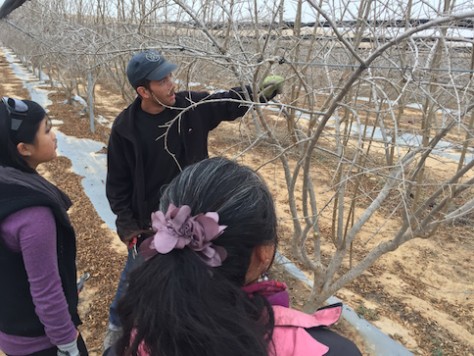 “Cut away the branches that are pointing straight toward the sky as well as those which are growing towards the inside of the tree. They will not bear fruit.” directed Steve. I tried to cut away those branches, but every time I tired, thorns would poke through my gloves, leaving behind a mark of protest. Looking at these bare branches, it was hard to imagine what a full bloom tree might look like. How do you gauge the potential of a tree when all it has are skinny branches?

“You see, pruning trees is all about the fruit. You have to keep the big picture in mind and imagine what you want the fruit to be like next year. How many pomegranates do you want? —50, 100, 200? How big? These answers will affect which branch to cut and how many branches to keep.” 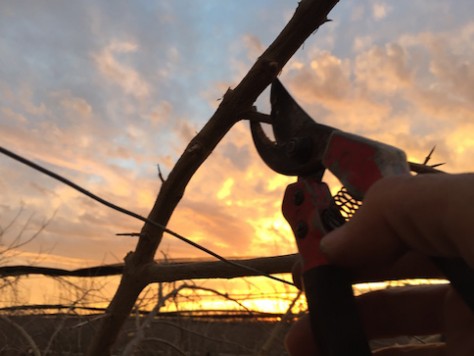 And so it went on like this, with him teaching me all the tricks and philosophy behind tree cutting, and me following him as we circled around the tree again and again, snipping off overgrown branches and cleaning away all the prickly thorns. But we spent just as much time stopping, and taking a step back to examine the bigger picture: which branch were crisscrossing, which ones were growing too close together, and most importantly, what was our ultimate picture for the tree?

After one hour, we finally finished. Steve handed me half of a pomegranate as we sat down to examine our master piece. The tree was no longer the lunatic octopus I saw an hour ago. Instead, it looked more like the skeleton of an umbrella with each main branch bent beneath the wires, welcoming a well of light to shine right through the middle. Looking more closely, I realized that I actually “knew” each branch. The branch to the right pricked me a bunch of times when I tried to cut off the one below it; the stub near the top was a stubborn one, and despite my valiant efforts, triumphed and remained; the tiny shoot near the bottom was my favorite because it was easy to bend and its many eyes promised potential fruits in the future. Each branch was different, but magnificent for what it was and I stood in awe of its naked beauty.

While we continued to work on the trees, Steve told me more about the political situation: “The Gaza strip is being bombed on a regular basis by the Israeli forces, Egypt is fighting ISIS, and the Gaza strip is filled with people caught in between politics, war, and terror. Occasionally, the gun shooting you hear is the guards shooting at people smuggling across the borders. But there’s nothing we can do. Honestly, it’s more like traffic noises now—we get use to it.”

This was probably the closest I had been to war and it was hard to imagine “getting use to it”. Here we are in the middle of the dessert pruning trees, while kilometers away war was raging and people were dying. But that was not the only dichotomy I encountered in Israel. Jerusalem is the center of religious zeal where every store shuts down by sun set of Friday to obey the Sabbath, while 50 kilometers away the city of Tel Avi is the leading gay city in the world with twenty-five percent of the population identifying as homosexual. Both the Jews and the Muslim want to honor their ancestor and share a piece of that identity, but are faced with the irony of building the Cave of the Patriarchs, a “half mosque, half synagogue”, over the tomb of Abraham, their shared forefather.   It seems like Israel is constantly in an identity crisis, trying to reconcile its past, but getting lost amidst of hatred and war.

I was curious what Steve thought about all this and asked if he was a religious Jew.

He took a moment and replied, “No…But it’s interesting you asked that. I’ve been thinking about that lately. The more I think about it, the harder it is for me to believe there is no God or some sort of higher being. What do you think?”

I wasn’t prepared to answer, but I shared what I knew: “I believe there is a God. He is real and he loves us because He created us. And most importantly, He wants to have a personal relationship with each of us.”

“So you believe He talks to you?”

He chuckled and asked, “So what did He tell you today?”

I paused, remembered and smiled, “He said, ‘Good morning’.”

“Wow. I never heard of that before.” Steve replied.

“I guess we make the world complicated, but God may be simpler than we think.” I smiled, as we continued to talk and prune our trees. 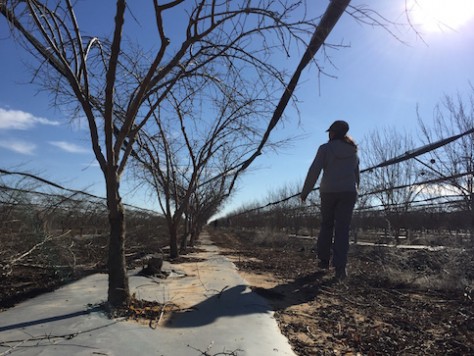 By the end of the week, I was experienced enough to prune my own trees. As I walked down the lane of trees I worked on, I felt an incredible sense of joy. What a journey it has been, meeting each tree before they were pruned, seeing their raw beauty, getting to know each branch, and to be a part of each tree’s life and design. I was reminded of a passage from John 15 from the Bible where Jesus said:

“ He cuts off every branch in me that bears no fruit, while every branch that does bear fruit he prunes so that it will be even more fruitful… You did not choose me, but I chose you and appointed you so that you might go and bear fruit—fruit that will last.”

Did God view me like this? —broken, messed up, but beautiful just as I am. Does He prune my branches because he sees my potential and is working towards a greater vision for my life? This may not give all the answers to my personal sufferings, the war raging on in the Gaza strip, or the dichotomies I have been challenged with, but maybe things are not as complicated as I think. All I know is amidst this dry and desert land, pomegranate trees bloom, and life prevails.