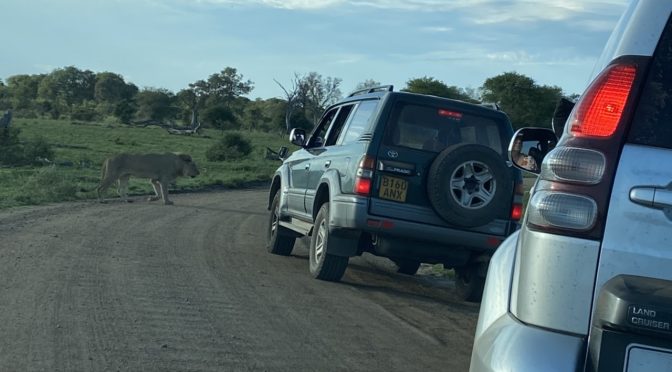 “Trust me, dad,” Joani reassured me. “I like solving puzzles. I can figure this out.”

I was at first skeptical and proposed to put all five big backpacks in a row in the backtrack. But Joani had another solution, which was to put 2 big backpacks under the front seats and only 3 big backpacks in the back with everyone taking out their packing cubes. And it worked! Remarkably well. I was quite proud of her as she did it all by herself without me around.

“Here is my strategy for our 3-day safari,” I announced to the children. “First, we sleep outside the Park on the 1st night and 4th night so that we only have to pay 2 day’s entrance fee but enjoy it for 3 days. Second, we shift our sleeping schedule — wake up at 4 am so that we can see those animals when they are most active and sleep early. Third, don’t lead but instead follow other cars so that they can find the animals for us!”

The children have their strategy too! They bought a “Guide to the Wild – Fun Activity & Info Book”, which on the cover says, “For Kids ages 3 to 103”! It lists interesting facts on the animals, has a checklist of all the animals one sees, and even a Game Drive board game to play as a family.

“Can you give us money when we spot an animal?” the children suggested. “This will increase the chance of seeing more animals and keep us awake!”

I agreed because I thought it will not be easy to spot animals since we don’t have a guide and it is our first DIY Safari. God must be smiling on us because in 3 days we saw a total of 31 different mammals and 42 different birds! It was also a great way to celebrate Olivia’s 24th birthday on our first day in the park. I happily gave them their cash prizes because most people said we were very lucky to see so many animals.

Some amazing experiences we had in Kruger National Park were:
– Witnessed an hour-long drama of a male lion looking for his lost brother and then to see them rolling around when they found each other.
– Four crocodiles swimming straight towards our car and for the biggest one (2.5 meters long) to suntan right next to our car.
– Surrounded by several hundred African Buffalos as they migrant across the dirt road.
– A group of 19 elephants walked in one straight line right in front of our car.
– Sat on a bench at night watching a movie while a hyena paced back and forth on the other side of the fence just a few feet away.

Like any good Chinese, after seeing things, we must taste them. Luckily, we found a store in the Park that sells jerkies of game meats, such as Kudu, Impala, and Wilderbeast. So depending on which animals we were observing at the moment, we would eat the meat of that animal right then!

The most entertaining game park guide

Besides Kruger Park, we also stayed at a private game lodge outside of Durban, where we met one of the most entertaining guides, Mias. We joined his Walking Guide Tour just to hear his stories:

“If an ostrich were to attack you, just lie flat on the ground. The ostrich will just stomp on you instead of ripping open your chest.”

Riding on an ostrich?!!

However, one of the most memorable moments we had in South Africa was visiting an ostrich farm in Oudtshoorn on Route 62. We thought we will just hear some explanation about the ostrich and see some baby ostriches. We were in for a surprise!

First, we got to feed and touch a baby giraffe. Second, we each got to stand on ostrich eggs (each egg can support 120kg of weight. Third, we got to touch every body part of a live ostrich, including the wing, knee, ankle, neck, and even the long windpipe. Lastly, we got to ride on the ostrich! At first, we thought we would just get on and get off the ostrich. No! We got to ride the ostrich which was like riding a wild horse running in circles!

Ostrich supposedly is quite dumb. We witnessed it first hand. Ostrich is usually pretty flighty and won’t standstill. However, once a hood is put on its head, the ostrich thinks that it is alone. With the hood on, we were able to touch every single part of its body and even to sit on the ostrich. At soon as the hood is taken off, the ostrich would just bolt away screaming as if it was saying, “How did a person suddenly sit on me!” As soon as the hood is back on, the ostrich immediately calms down as if nothing had happened.

In South Africa, one can buy ostrich eggs in a regular supermarket! We were so excited when we found them on the supermarket shelf next to chicken eggs. It was such a strange sight. We felt like the Flintstones. We also bought minced ostrich meat as well. An ostrich egg is equal to 24 chicken eggs and is creamier. It took us four meals to finish one. Delicious!

Swimming with the penguins

We’ve seen beautiful panoramic photos of Cape Town before. But what we didn’t expect was how close we were able to hang out with the penguins & fur seals.

Coming back with my parents

Originally, my parents were going to join us in South Africa for the safari as a way to celebrate my father’s 80th birthday. Due to COVID, they weren’t able to come. I hope that I will be able to bring them to a safari when the world is back to normal. Meanwhile, I hope they enjoy these videos and photos.