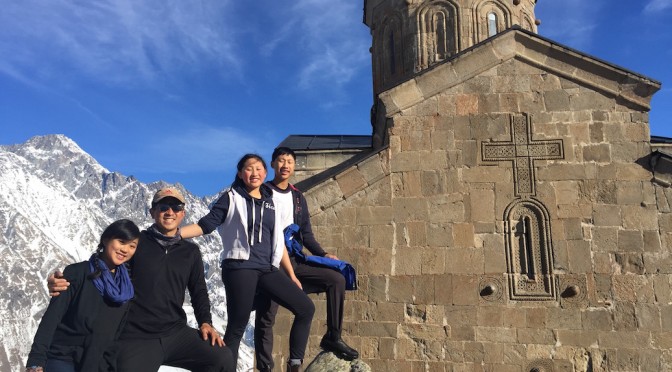 “Hey, do you hear the bell?” Olivia asked looking at us doing our work in the AirBnb apartment in Yerevan, the capital of Armenia. “Isn’t it interesting?”

“What do you mean?” I responded, not sure why she found the bell sound so interesting.

Olivia came closer, looked at me, and grinned, “You know, for the last 3 months we have been hearing the Islam prayer call broadcasted five times a day. Now, we hear bell. So this is what it is like to be in a Christian country!”

“You are right! It is interesting…” I realized.

After eight months and 13 countries, for the first time, we arrived in Christian-State countries of Georgia and Armenia of the Caucus Region, jut east of Turkey. Before arriving, none of us had much idea of what Georgia and Armenia are like, except that we know of a good friend of ours whose grandparents are from Armenia and I heard of the term “Armenia Genocide”. Originally we were not planning to come here. But since Georgia was right next to Turkey and it is visa-free, I decided to just swing by to check it out. And we were not planning to come to Armenia either. But our Couchsurfing host in Georgia couldn’t host us due to the fear of the Bird Flu Virus so we had flexibility to swing by Armenia as well, which is right next to Georgia.

“You know what, it is no longer a Christian country,” Annie replied to Joani. “Students can’t even pray in school nowadays.”

Having been a Christian living in America for most of my life, I found it foreign to not think of America as a Christian country. But coming to Georgia and Armenia, we began to have an understanding what a Christian country is like through the different locals we came into contact during our stay there.

“Where are we going?” I asked Hrant whom I contacted through Couchsurfing. Originally I was hoping that we can stay with his family but five people is too big for his place so instead he offered to show us around.

“We are going to a very important place in Armenia. We are going to see the first church in the world!” Hrant shared proudly to the children. “You know that Armenia is the first Christianized nation in the world in 301 AD, before Constantinople. Few years after the Armenian king was converted to Christianity, he had a dream that God wanted him to build a church. So the church was built!”

“Do you know what the capital city we are in, ‘Yerevan’, mean?” Hrant continued. “‘Yerevan’ in ancient Armenian means ‘I see land’. Noah’s ark is speculated to be on top of the Ararat Mountain which you can see from Yerevan on a clear day. And Yerevan is one of the oldest continuously inhabited city in the world.”

With these and other interesting facts and stories, the children and I began to piece the puzzle together of how Armenia became the first Christianized country followed by Georgia just a few years later. All along the Yerevan and Tbilisi cities, we saw symbols of the cross on stones and churches called “Cross Stones”. These were ancient stone monuments with beautiful and intricate carvings to commemorate significant events in the past. Recent ones were carved to commemorate WWII and the earthquake of 1988.

“Do you notice the special carving of the cross on these stones?” Vako asked the children. Through Couchsurfing’s “Nearby Event” function, we came in contact with Vako, a diaspora living now in Armenia, who offered to give us a free city tour of Yerevan.

“Notice how the four ends of the cross are like tree buds or plants?” Vakos continued. “They represent that the cross is a living cross!”

“There are crosses everywhere. Everywhere. I almost felt a little uncomfortable,” Olivia recalled.

Our visit to the National Museum of Georgia was also very telling of the importance Christianity in Georgia.

“Outside of Africa, the first human remain was found here in the Caucus Region,” Neno explained while she proudly showcased the intricate gold jewelry artifacts from more than 4000 years ago. “The technique for soldiering these tiny gold beads onto the gold jewelries has been lost long ago. The first wine in the world was also found in Georgia.”

I told the children, “If Noah’s ark did land in the Caucus Region, then it makes sense that people must have lived here from long, long time ago. Also, the first time wine was mentioned in the Bible was when Noah planted the first vineyard.”

Neno continued, “Two of Jesus’ twelve disciples, Matthew and Simeon, preached and died in Georgia. Their remains are buried under the churches here.”

“We are proud that for nearly 2000 years, Georgia remained a Christian country despite being surrounded by Muslim countries on both sides.” Neno shared. “Because Georgia is right between the Higher Caucus Mountains and Lower Caucus Mountains, for thousands of years, the Silk Road passed through this area. The people of Georgia had to constantly fight off attackers from both the East and the West. There were the Shamanistic Moguls and Zoroastric Persian from the East and the Islamic Byzantine and Ottoman empires from the West. Last century was the Atheistic Russians from the North.”

The children and I were had not thought of the uniqueness of Georgia and Armenia in such a way. Indeed, it must have been the providence of God that allowed these two countries to never relinquish its religious root despite constant pressure and even threat of death.

At the Armenia Genocide Monument and Museum, we saw graphic photos and read true stories of how the Turks systematically targeted in 1915 and massacred Armenians in Western Armenia because of their Christian belief and also out of their personal interest, as Armenian were known as very good merchants, second to Jews, and were generally well off. Some Turks kept Armenians orphan under five who did not know what happened as free slaves and converted them to Muslims. More than one million Armenians were killed or died from deportation to Syria.

Afterwards, Olivia shared that what impacted her the most was the words from, Arshaluys Mardiganian, a young survivor of the genocide. She wrote in her autobiography which later was made into the movie, “The Auction of Souls”:

“…I saw my own mother’s body, it’s life ebbed out, flung onto the desert because she had taught me that Jesus Christ was my savior. I saw my father die in pain because he said to me, his little girl, ‘Trust in the Lord; His will be done.’ I saw thousands upon thousands beloved daughters of gentle mothers die under the whip, or the knife, or from the torture of hunger and thirsty or carried away into slavery because they would not renounce the glorious crown of the Christianity.”

After having just visited Turkey, feeling Turkey was our favorite country on the trip, and being so impressed by their hospitality and kindness, the children and I had a hard time to hear this dark side of the country’s past. We realized the evil can be in any of us and we should be on guard constantly. During middle school many years ago, Olivia wrote a research paper on genocides. She often reminded us her thesis statement — Remember, ‘stereotype leads to genocide!’. In a few years, she has now visited the sites of three genocides, Cambodian, Jew, and Armenian.

One way the Georgian and Armenian survived such attacks and persecution was by building their churches like fortresses, on high remote cliffs or mountains with large stone walls, small window openings, and strong doors, such as the Gergeti Trinity Church we visited at Kazbegi, right in the High Caucus Mountain Range. The church has become the iconic image of Georgia with the snowy 5000+ meter volcanic Mount Kazbek as the backdrop and another high mountain range as its foreground with a vast valley below it. We felt we were in fairyland. The children and I hiked two long hours in deep snow to reach the church and afterwards were all happily soaked from sliding and tumbling down the steep snow banks on the way back.

Often we associate Christian countries with orchestra concert, ballet, opera, and art museum. Georgia and Armenia were no exception. What was the exception was the price. At Yerevan, we were joyfully surprised by the the USD 2 ticket for the Jewish overture orchestra and piano concert and the USD 6 for the Armenian folk lore ballet, Gayane. The children were so excited to attend their first concerts of their life that they dug deep into their big backpacks. Olivia wore the black-white kurta she bought in India while Joani wore her light red dress that I advised her not to bring because it was impractical.

Due to the lack of people attending the orchestra concert, we were allowed to sit at the best seats from our nose-bleed section. We quickly took the center first row right next to the pianist and the first violinist. We were so close to them that we can see the sweat on the pianist’s brow. When the pianist finished at the end of the night, we clapped so loudly and continuously that we were pleasantly surprised with an encore.

“I love dancing but I had never seen a dance performance like this before. I really like it,” Olivia shared. “It was dancing, the whole hour!”

“Remember when you asked the ticket clerk what language will the ballet be?” Annie reminded me humorously. “The ticket clerk said, ‘No language. It’s ballet!'”

Yerevan not only has the best value in dances and music, it also houses one of the most unique art gallery I have ever seen, called Cascade. The art gallery is built on a high hill overlooking the city and we rode up on escalators inside the building levels after levels efficiently admiring art pieces on the left side of the escalators. In the middle of the monumental Cascade, their are outside steps to climb back down while admiring more art piece in an outdoor setting.

“I really like Armenia,” Joani said. “There are cheap concerts, good food, and outdoor skating ring. I feel like I am in Europe!”