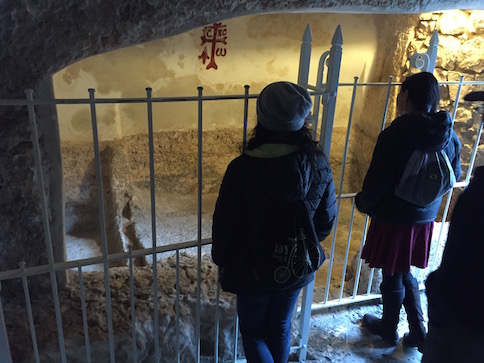 In Jerusalem we liked to follow the path of Jesus, and that includes where he was hung and buried. People believed there were two possible places where Jesus was hung and buried. One was the Catholic version and the other is the Protestant version. The Catholic version is at a place that was right outside the city wall of Jerusalem in the past. The Catholics built a church over that spot. In the church it had many pictures with halos on Jesus’s head, and people would pray in front of the picture of Jesus. It really made it feel like the people are worshipping the picture of Jesus like an idol.   I didn’t feel comfortable in that type of gloomy and grey atmosphere. Instead of in a building, the Protestant version is out in the open fresh air. Therefore it made me feel a lot more at home, and I had peace in my heart.

The Protestants believed the place where Jesus got hung and buried is right beside the bus station nowadays. It’s at a place called The Garden Tomb. The Garden Tomb has many beautiful autumn trees down the path to the place where you can see the “skull”. In Luke 23:33 “When they came to the place called the Skull, they crucified him there,” over there we saw the faint lining of the “skull” that was mentioned in the Bible. Then our wonderful tour guide told us some information that really surprised us. For example, people would always think of the cross on top of a hill, however it would make more sense if it was at the bottom of a hill. Since in the Bible it said that people would walk by and spit at Jesus. It would take much more effort the hike up a hill just to spit at him, instead of just walking past him on flat ground to spit at Jesus, then continue their day.

Next our tour guide led us to where Joseph buried Jesus. She let us examined a thick mark that was imprinted on the ground by a huge boulder. The tour guide also showed us a seal mark on the wall that was left from the Romans where they sealed up the boulder so Jesus couldn’t come out. Then we stoop down into the cold cave and took photos of the the sign they posted: “He is not here He has risen”. It was such an amazing experience to be able to see the remains that was left about 2000 years ago.

Being at the Garden Tomb really made the Bible come to life, and it made that day unforgettable. I hope in Israel we will experience many more amazing things. More importantly, these wonderful things will strengthen my belief as well.