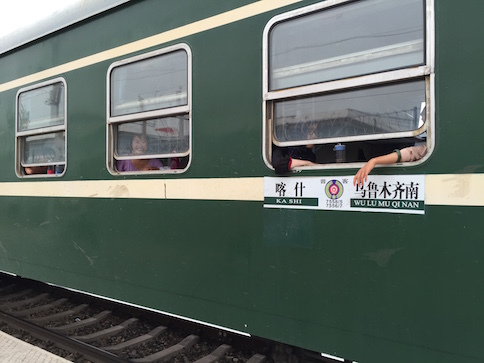 “Why is there no air-conditioning in the train?”

“Why can’t I open the train window?”

“Why is there no hot water to drink?”

“Why did the fan stop working?”

“Why is the hot water bottle leaking”

We kept bombarding the train conductor with endless questions as the 24-hour train from Turpan to Kashgar was altogether different from the many trains we had taken throughout our trip in China. We were expecting the typical cool Chinese train and weren’t prepare to face this unexpected turn of event.

It was boiling and suffocating inside the train, especially given that it has been the hottest summer in Xinjiang in the last 10 years. When the train stopped moving, which was quite often as it stopped at every small train stations, it felt unbearable. The children searched all over the train carts to find the coolest spot and we quickly drank all the water we had with us and had to resort to drinking hot water with added Tang orange flavored powder. Joani took her fan and sticked it outside the narrow window opening to try to draw the cool air from the outside into the hot muggy train cart inside. But our sweat just kept coming down even in our sleep. We laughed to ourselves when we realized that with all the water we had drunk, none of us had to use the toilet yet!

“What do you expect from such a train with such low price!” the smiling train conductor replied light-heartedly.

“This is an old train kept for the minorities of Xinjiang…I mean for those who can’t afford an air-conditioned train,” the conductor changed his wording after he realized that it might not be politically correct. “One side of the windows can’t be shut tight to prevent the dust from coming in so they were welded shut and can’t be open. There is electricity only when the train is running so that the fans can’t be turned on when the train stops, even in the heat of the day. The hot water is boiled by coal so it can only be provided when we make the call to get hot water. The hot water bottle leaks because they are just too old. The truth is that running the train cost more than the ticket price so these train carts should have been retired. But the government kept them running so that the poor can have an option.”

“I guess this is a ‘charity’ train!” Annie quipped. “Or the train from hell!”

“Didn’t you want to walk with the poor? Well, this is one of those places,” Annie reminded me.

While sitting up trying to cool myself next to the window at 3AM in the morning, I thought about what Annie said. indeed, it is easy to say to the poor that I understand how you feel. The feeling was so much more vivid when I am experiencing personally. The discomfort, the lack of sleep — the suffering of it all gave me a new sense of understanding of what it is like to go through life with a sense of helplessness.

“Your children are so lucky to have this chance to learn through traveling,” a Han lady teacher sitting next to me remarked after learning of our trip. “I don’t know of any family that does this in China. Maybe it is because Chinese had lived such difficult lives in the past. Now they have a ‘fear of poverty’ and want to run away from it as quickly as they can. When they travel, they just want to pamper themselves and stay at the best hotels.”

For me, I have the ‘fear of wealth’ and seems to be running away from it, wanting not to be trapped by the never ending pursuit of money and power, by the indifference to the needs of the poor, and by the fear of having children who feel that they deserve all the things they have.

Maybe it is inevitable that all of us need to go through the cycle of poverty and then wealth before we can reach a proper balance of the two. This trip along the Silk Road where we are traveling simply is my attempt at arriving at the proper balance. For many nights, we slept in tents and trains and stayed in couchsurfer homes and worked for our food and accommodation. We took the ‘charity’ train to Kashgar, the most western city of China, which is closer to Israel then to Beijing. But during the trip, we still enjoyed the simple pleasures of life, such as sipping ice shaved yoghurt in the 70 C heat of Turpan or counting the shooting stars lying on top of the warm sand of the dune in Dunhuang. We had some nights to relax in air-conditioned rooms with attached bathrooms and enjoyed the hospitality of friends and couchsurfing hosts and the unexpected generosity from restaurant owners.

The train from hell most likely will be one of our most memorable and through provoking experience in Xinjiang!