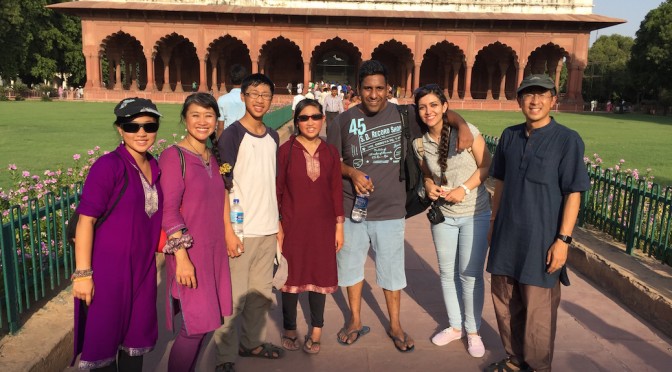 “I am confused…so confused..I am actually very confused,” Vikas, our Couchsurfing host in Delhi, said with an Indian accent and a puzzled look when Annie asked him whether it is better for our girls to wear traditional Indian clothing. “Every guest keeps saying this to me.”

Annie continued, “We heard that if we wear traditional Indian clothing that covers down to the ankle, man will less likely to harass us. Is that true?”

“Well…I don’t know…I guess so…but I really have never seen that..” Vikas stumbled a bit with his words.

The next morning Vikas came up to me and said, “Your wife makes sense. Yes.”

“Last night I was on the metro with Forough (an Iranian female Couchsurfer guest staying also with Vikas). I was completely freaking out. It was so hard for me to talk. Everywhere was dead silent. Every eye was on her. I was there and I saw everything. Like, they really stared. I finally understood what the German Couchsurfer guest meant when she said that she was stared by men all the time. I told Forough, ‘Next time you are lost, call me. And I will pick you up.’”

This was how we were introduced to India at Delhi, a place where our five senses were overwhelmed unlike anywhere else.

“I can’t wait till we get to India,” Joani exclaimed a week before coming here. “I heard the food there is really great!”

“Many people told me that India is India. It is unlike any other country in the world. There is no comparison. You will not find another place on earth like India,” I told the children.

Olivia added, “Many people told me that India is a country where you either really love it or really hate it. There is no middle ground.

“I think it is more like you love it one moment and hate it the next,” Annie laughed.

In Delhi, we were graciously hosted by Vikas, who already took in one Couchsurfer Forough but still gave us his living room to sleep because he was really interested to meet us. Vikas started to host Couchsurfers a month ago and he has never been the same since.

Vikas shared a Couchsurfing story with us, “I hosted a couple from Switzerland few weeks ago. Before they left the house to see the city, they waved and said goodbye to my live-in housekeeper. I was shocked.”

“I was shocked that they spoke to my housekeeper. I lived with him four years and I never said ‘hi’ or ‘goodbye’ to him…That afternoon we had a good talk…a very long good talk. I got to know more about his family and his children. Before when my housekeeper went to see his family in the village, I used to freak out. I didn’t know how to run the house, cook for myself, and take care of things. I couldn’t do anything or know where things are in the house. I would keep calling him asking when he will be coming back, how long will he stay. His wife is sick so he went back home to take care of her. I haven’t call him even once. I told him to stay how ever long to take care of his family. He only sees his children few weeks in a year. The children don’t even really know him.”

“So how long has he been gone?” Olivia asked curiously because it sounded as his housekeeper has been gone for three months or a year.

We eyed each other and chuckled.

“He’s very modern in that he thinks it is important to spend more time with family…but it is like a self-discovered modernism!” Olivia recalled laughingly.

He continued, “Before I was quite lazy and wake up even later than today. But now I have to open door for the cleaning ladies and have to take care of the running of the house so I wake up earlier now.”

“Why are there two cleaning ladies here today?” I asked curiously. As a matter of fact, later Vikas also shared that he has a driver that waits outside of his door everyday whether he plans to use the car or not.

“Does caste system still exist?” I asked with great interest being a bit shocked that the cleaning of the bathroom for the entire neighborhood is done by one lady.

“No, there is no caste system in India anymore…but…I guess people still care about marrying people of the same status…” Vikas reflected.

“…and it seems like certain people also only do certain type of work.”

“I guess some aspects of the caste system still exist…”

“What’s there to see in Delhi?” Annie asked changing the subject.

“That’s a good question…I don’t know,” Vikas replied. “I only started to know my city this past month when I hosted Couchsurfers because they often asked me about the different tourist places in India. Because of Couchsurfing, I now know the best places to buy women’s clothing, to do nose piercing, to buy backpacks, and to eat!”

“And also you learned about patience!” Joani laughed. “Because yesterday when you bring us to shop everywhere, you were so patient.”

“Yes, I also learned patience!” Vikas laughed at himself.

Not only did Vikas helped us with buying necessities, he also brought us to the best street foods in Old Delhi, because we told him that we are a family that loves food.

“Even though he doesn’t know any where, he just call his friends and relatives  to find out the best places to eat,” Olivia recalled.

“That’s what I am most impressed about him. He brought us to the best meat places. He is constantly calling all his friends, all his relatives, because he knew nothing,” Olivia continued. “At first I thought his calls were work related, but it turned out that every time he was on the phone was to find out where to go.”

“It’s like he is a complete foreigner that is getting to know his own country so we are getting to know India at the same time as him. He has such a humble heart to learn, very teachable. Everything is new and exciting. He is now looking at his own country and his community in with brand new eyes–outside of the social bubble,” Annie shared.

“It was funny how he thought the famous Red Fort was just a wall from one end to the other. He never been inside even though it only costs 10 Rupees for him while we have to pay 250 Rupees!” Nathan laughed.

“I like talking to him because he is so funny,” Olivia laughed as well.

“Everything is interesting about him.”

During our 4 days 3 nights stay, we enjoyed with Vikas and Forough a myriad of authentic Indian street foods in different parts of Delhi, had lots of fun and animated conversations/arguments around his dining table, learned about the history of India from the Red Fort tour guide, and sensed the incredible inner strength of Gandhi at the Gandhi National Museum. Nathan also had an in-depth talk with Forough about his personal faith in Christianity and Annie had the chance to bless Vikas and Forough through prayer. We also joined an enlightening Heritage Walk at the muslim slum area of Nizam-ud-dun through the NGO Project Hope. During the walk, we learned how to wear the traditional ‘pajama’ pants, how to brush teeth with ‘neem’ tree branch, and how to eat food with our hands. We joked that the tour guide must be laughing why Americans don’t know how to wear pants, brush teeth, or eat food.

Indeed, the children and I were transformed as well. Through staying at a Couchsurfer host’s home and through walking the streets and monuments of Delhi, we had a super fast introduction to the people and culture of India.