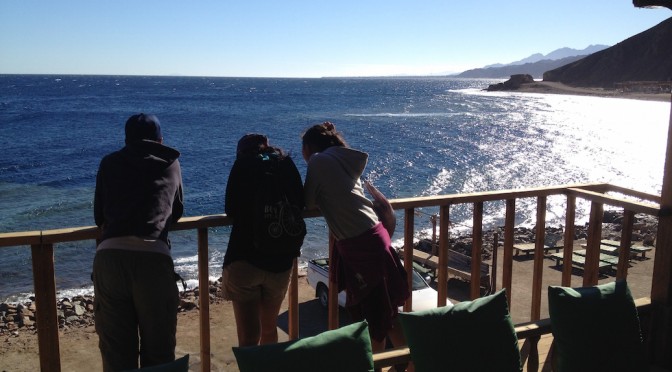 “I have traveled for 3 weeks in Egypt. You are the first person that made me angry!” I yelled at the Arab driver.

I never felt so angry for a long time. In Egypt we faced scams in most of the tourist spots, with the Pyramid of Giza being the worst. As the hostel owner at the Giza said, “Since the Pyramid is the number one attraction in the world, it comes with the  number one scammers in the world.” But despite all the fake prices and lies that we endured, I never got angry. This morning was a different story.

It was 8:30AM and the driver turned restaurant owner was taking us along a desert gravel beach fringed with clear aqua blue ocean by the coast of Sinai Peninsula. We were heading towards the world-famous Blue Hole. The Blue Hole is a gaping sinkhole that drops straight down, as deep as 130m. The outer lip of the Blue Hole is full of marine life, and a reasonable plunge into the hole itself is somewhat akin to skydiving. The past two days, Olivia, Nathan, and  I had already done three scuba dives at the Lighthouse, Golden Block, and Umm Sid coral reefs along the Sinai coast. Because our diving certifications were not Advance, we were not allowed to dive at the Blue Hole. Not wanting to miss this famous coral reef, we decided to snorkel instead as a family.

We paid for the transportation and snorkel gears with a tour company. At 8AM we got on a car supposedly to the Blue Hole. However, to our surprise, half way the car stopped and we were told to get on a pick-up truck. Not able to communicate in Arabic with the first driver, we had no choice but to get on the truck. The driver of the truck told us that he will take us to the Blue Hole. We told the driver that we told the tour company that we wanted to be picked up at 11:30AM. The driver was surprised and a bit agitated. As it turned out, the driver was a restaurant owner at the Blue Hole, as well as the provider of the snorkel gears. He was expecting us to spend at least 30LE per person at his restaurant for bringing us to the Blue Hole and lending us the snorkel gear. On the other hand, since we already paid 15LE person for the snorkel tour, we expected to be provided transportation and snorkel gear regardless of whether we use the restaurant or not.

“I don’t understand you. You are a strange family. Are you going to have your children sit at the beach under the sun?” the driver yelled back angrily gesturing with his hands like many of the Arabs we have seen during our travel in the Middle East.

He continued talking in louder and louder voice, “Let me tell you. I am the owner of the restaurant. Usually people come, have some tea, swim, have some food, stay until the afternoon. Why do you bring your own food and want to leave at 11:30. You do not make sense!”

“The tour company owner assured me that we don’t have to buy food if we don’t want do. It is up to us. Maybe we will eat something. Maybe we will not. Why do you force us to buy food?” I responded in louder and louder voice as well, feeling angry for his attacking our decision and value on how we spend money and angry at the tour company for putting us on a restaurant owner’s truck.

Even our children felt insulted. They were thinking to themselves, “Who is he to judge whether we should rest outside or not?” After traveling for nearly 6 months, we had camped at 3000 meters, hitchhiked, slept on airport chair, lived in parking lot. For us, resting by the ocean was nothing unusual.

“You are very rude!” Suddenly, Annie  who has been keeping quiet trying to keep her temper down, flared at the restaurant owner.

“What did you say? I was not rude,” the owner defended himself.

“Of course you are!” Annie retorted, fuming volcanic heat.

“Fine. You can have the snorkels and you can stay by the ocean,” the owner yell and he turned and went inside his restaurant.

I was glad the confrontation was over but deep inside I felt our trip have been ruined by the bad experience. Nevertheless, we gathered our things and prepared to head towards the ocean.

“Come here,” the owner beckon me with a calm voice and a big smile motioning for me to come next to where he was sitting. “Sit down here.”

I hesitated because I haven’t gotten over the previous confrontation. But out of basic courtesy, I decided to walk up and sat next to him.

“I am sorry for what happened. I was not trying to be rude. Let me treat your family to a pot of tea and feel free to sit in the restaurant, put your things here,” the owner said with a smile. “Please tell your wife to come here. I want to talk to her.”

I was surprised at his sudden change of attitude. It seems like Annie’s accusation of him being “rude” made him realized that we were actually angry and not just speaking loudly as Arabic people often do when they discuss things with each other even when there was no animosity.

“Come closer,” the owner beckons Annie. “Sit next to me. I want to see you smile.”

Annie was still angry and didn’t want anything to do with him. But after seeing his persistence and apparent genuine change of attitude, Annie gingerly squeezed out a quick smile.

“The tea is free, right? And we don’t have to buy anything here if we don’t want to, right?” I asked again just to make sure I didn’t misunderstand him because the change was so drastic and the tea was not cheap at Egyptian 10 pounds.

“Yes, of course. These are all free. You are friends now. We have a saying that you can’t be friend unless you have a fight. Now that we had fought, you are friend and I am giving  you free tea,” the owner, whose name we later found out was Mohammed, said with a friendly voice. “And whenever you want to leave, just let the cook know 30 minutes beforehand and we will take you back to your hotel.”

Although I was still a little skeptical, I decided to trust him and took the tea as a sign of reconciliation. After we all finished the hot tea which warmed our bodies, Mohammed went with us to the ocean front and showed us where to enter the Blue Hole coral reefs. Later, he also suggested us to enter through the Bells coral reef which is a narrow breach in the reef table that forms an underground canyon.  After 100 meters of swimming along the current we would then enter the Blue Hole. We started to chat with Mohammed and we all started to laugh and enjoy each other’s company.

“When you finish your swim, I will treat you to another pot of tea,” Mohammed said with a smile.

So we entered the coral reef following Mohammed’s instruction. We were not ready for what we were about to see.

“Oh my gosh! Oh my gosh!” we simultaneously yelled to ourselves few meters into the coral reef.

We kept coming up to the surface to look at each other and to scream and then go down again. A bystander would have thought that we had some accident and where screaming for help.

We saw scorpion fish, clown fish, barracuda, clams, anemone, puffer fish, grouper, and many, many other colorful fish. At one point, all five of us were surrounded by thousands of small fish which kept circling around us. What we saw that morning was even better than all the three scuba dives we did in the previous two days.

The place was so amazing that we stayed 3 hours past our original time to leave. We also decided to order five lunch set of fish at the restaurant at our own free will, costing Egyptian 125 pounds. We also ended up enjoying 3 free pots of hot tea, which was much welcomed to warm up our bodies after each swim.

Afterwards, as we hiked three hours in the dark of the night for the sunrise at Mt. Sinai, we all agreed that our snorkel that day at the Blue Hole is definitely one of the highlight of our trip in Egypt. Who would have thought that with one small gesture or one change of voice, a foe was transformed to a friend and a bad experience into one of the best day of our trip.

Three pots of tea to make a friend in the Red Sea of Egypt!