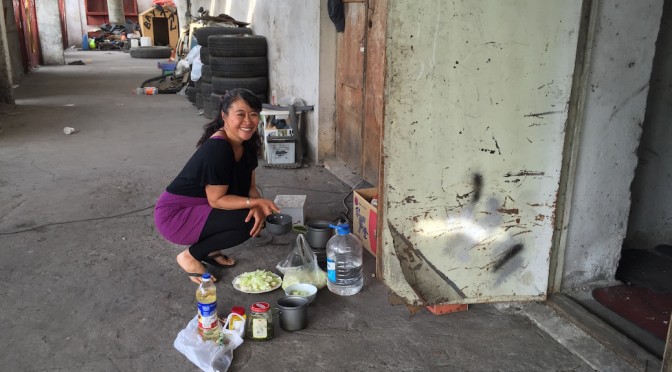 “Dad, isn’t that an abandoned building?” Nathan asked with a slight fear in his voice.

The abandoned building had broken doors and windows that were patched with wooden planks or locked up with metal bars and padlocks. The surrounding walkways were overgrown with weeds. The lot was surrounded by fences made of shiny grey aluminum sheets, the type that one normally see at construction sites.

“Let’s first go in and see…and see if it will work out. If not, we can always leave,” I encouraged the children.

After waiting for one and a half hour outside the parking lot of a sophisticated cafe, we met the kind and friendly business partner of our couchsurfing host who was to take us to the place we would stay for the next few days in Bishkek. He led us down the street for a hundred meters but to our surprise he stopped in front of a run-down looking parking lot with few used cars and a 2 floor abandoned building.

Sitting inside the car closest to the street was a muscular looking man, wearing a hoody, who appeared to be guarding the entrance to this abandoned lot like a lookout person in a gang territory. The host said some words in Kyrgyz to him and we moved on.

We passed through a high metal bar fence and continued to the back of the abandoned building. By this time I was on full alert trying to decide whether we were walking into real danger or whether my usual instinct was playing tricks on me. The business partner however talked so kind and gently to us, I decided to trust him and let go of my fears.

At the back of the building we saw around fifty used Japanese cars. There were more abandon buildings, over gown weeds, and a row of rooms protected by more metal bars. We were led to a small office room with cracked concrete walls and no windows. We entered the room through a set of swinging metal bar doors, feeling like hostages being led to imprisonment. In the room was a couch and three desks. On the ground were three carpets that appeared not to have been cleaned for a while. When we put our bags on the floor, without even taking anything out, the bags already took over the whole floor!

“May I ask where is the toilet?” I asked the business partner, trying to get a better feel of this place.

“The toilet is local style – you know what I mean, right?” the business partner smiled.

He brought us out of the metal bar door and around the corner to the side of the abandoned building. He led us to a set of orange hoses next to an open sewer manhole.

“To use water, first go 100 meters towards the wall and turn on the lever of the main water source. Then come back here to turn the lever clockwise for the orange hose. Let the water run down the sewer manhole. The water is clean so you can drink it. You can use the hose if you want to take a shower.”

“Is there a place to cook?”

“Yes, you can cook here,” the business partner pointed to a small portable electric stove sitting on the ground.

“Think of it as ‘urban camping’,” I told the children trying to placate their (and mine as well) obvious feeling of uncomfortableness. “The host was very generous to let us have a place in his used car lot office when he already had five couchsurfers in his own home and also when he is out of town.”

“Who is that person there?” I pointed to a shirtless, slim-looking Asian with his hair tied up in a pony tail who appeared to be living in another room in this abandoned building. I wanted to know all the people living here –just in case…

“That is strange…I don’t know who he is,” the business partner said with a puzzled look.

I went on high alert again. “Are there all sorts of strangers living here such that even the business partner does not know?” I thought to myself.

As it turned out, the ‘stranger’ was Santori, a Japanese backpacking couchsurfer who arrived just a day before us.

“Konnichiwa,” I said to the Japanese.

“Hello,” he replied back with a slight bow and a wide friendly smile in fairly good English.

“Where are you traveling?” Nathan asked with curiosity.

“I started in Southeast Asia and then India and then Kazakhstan. Now I am here in Bishkek waiting to get my visa for Uzbekistan and Iran so that I can get my visa to Turkmenistan.”

“How long have you been traveling?”

“I have traveled for a year now. I have four more years to go.”

That was just the beginning of Santori’s incredible story. As we got to know him more and more, all of us just looked with wide open eyes and kept interjecting, “Wow…Wow…Wow!”

His father is a factory worker and his mother is an English teacher. His family eats only one meal a day and his father jogs 40 km each day to and from work, waking up at 3AM each morning. Santori was 19 years old and recently graduated from high school. He had never traveled before, but when he graduated the idea just hit him like a ‘wave’. So he worked four months as a waiter and a road construction worker (earning USD 9000) and off he went. Originally, he was to travel one year but after a while he decided one year was too short. He said that his parents are too busy to miss him.

“How do you have money for five years?” We naturally asked with great curiosity.

“Oh, it is easy! In India, I sleep at the beach or in the temple. I learned to eat vegetarian curry there. It was the cheapest and why not? Here in Kyrgyzstan, I drink water and eat nan (bread) which is only 20 Som (USD 33 cents).”

“I hitchhike. Inside the city, I just walk.”

“The bus is so cheap here though.”

“Why take the easy way?”

Santori was true to his word. The next day, he walked 20 km in Bishkek to get his visa from the embassies.

After getting to know our fellow couchsurfer, we had a quick family meeting.

“There’s no place for us girls to take shower,” Annie complained.

“I know…Why don’t we give this place at least one night. We can decide tomorrow if we will stay longer or not,” I tried convincing everyone with great efforts.

That night, we took a bus to a nearby bazaar for dinner and we all slept early as it was already quite a day. Annie and I took the couch and the three children slept on the floor.

The next day, we lived as if we were camping in the wild. We ate leftover bread from the previous camping trip for breakfast. We went to a small shop next door and bought two sandwiches and three Aslanfoo (Uighur spice cold noodle) for lunch. We also bought frozen chicken legs, cabbages, tomatoes, onions, spices to cook for dinner. Because there was no large pot, the chicken legs were microwaved with spices while Annie used two small camping pots to cook at the same time on one electric portable stove. That was amazing. We called it five star urban camping since it was like camping but we had running hose water, electric stove and even fast wifi! Out of the 74 days of our trip, that day we spent the least amount of money in a city–just 12 dollars.

To each of our amazement, we adjusted to our environment faster than we thought we would have.

“We were pretty complaining when we first arrived. It didn’t look livable…but then we DID live there,” Olivia recalled. “The floor was unclean, the couch was probably even worse. The place was kind of scary and spooky. Remember how we were locked in by the outside gate and we had to climb over it? Then we were locked out and had to climb back in?”

“But when we got used to it and it was actually fun!” Joani interrupted.

“Well, not after that big meal at Boka and Arina’s house!” Olivia laughed still with memories of her stuffed stomach.

Nathan added, “Our source of water was from a hose! And there was spider webs in the pit toilet and the toilet curtain couldn’t be closed all the way. The bathroom smells.”

Annie joined in, “At least at the village or at the campsite, the bathrooms had beautiful views of the countryside.”

“The pit toilet hole was so small. The pit hole usually goes down quite a way down but this one was shallow and there was flies inside it,” Olivia laughed. “I tried to minimize the number of times I use the toilet. When we were at a restaurant, even when I don’t have to ‘go’, I would ‘go’ so that maybe I can last through the night. Then I only had to go to the bathroom in the morning. Or when we went for dinner at Boka and Arina’s home, I used it three times! Hee…Hee.”

“I got through using the bathroom by reading my book, ‘The Bathroom Reader’,” Nathan said proudly.

“How do you last that long?” Joani questioned with a incredulous look.

“Nathan, no more! When you poop, pooooop. Focus!” Olivia scolded Nathan just as if she was tutoring Nathan doing homeschooling.

“On the first day, I didn’t want to stay there,” Joani recalled. “But when we left, I actually was kind of sad. The wifi was nice. The puppies were nice. And Santori San…he was funny! Even though the second guard doesn’t know how to talk to us, didn’t really smile or anything but you can tell he was a nice guy. He would try to talk with us with this dictionary phrase book that took forever. And on the last day, he gave me and Olivia chocolate, before he gave us watermelon.”

“Going to the grocery shop definitely helped. We cooked breakfast, then lunch, then dinner. We kind of had a routine. Then things changed,” Nathan shared.

Annie continued, “The key is that we started to have a routine. Even living in the most basic environment, once you have a routine, it becomes livable.”

“I tried in small ways to make it more livable. I cleared out the table and brought in chairs so that you guys have your own table space to work. Or else I don’t think I could survive,” Olivia shared. “Humans adapt. We stayed there for three days. We could probably live anywhere. That’s the truth.”

“…But that’s a secret. Dad, you didn’t hear what I said,” Olivia whispered with a sly look.

“But don’t expect us to like it!” Joani added.

“We watched movies for four hours one night,” Olivia reminded.

Annie added, “Watching movies helped to give us a routine…or fantasy, right? We forgot where we were, sort of like when we were surviving in the Yi village. When things are harder or uncomfortable, then you tend to make effort to escape or forget.”

Olivia joined in, “In another word, we escaped…We forgot where we were!”

We had lots of fun recalling our unique experience of “camping” in an used car lot. It was definitely a once in a life time experience…or maybe we will do it again?