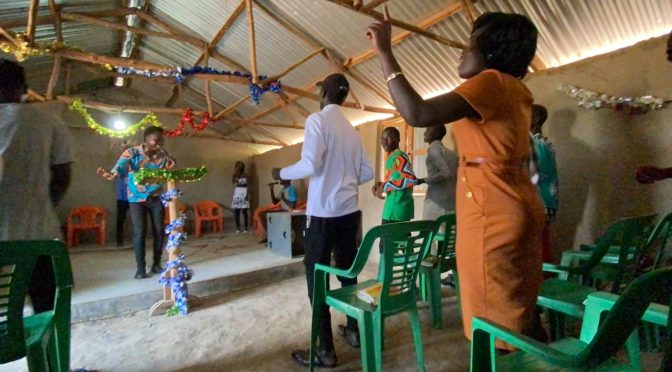 “Wasn’t that ‘Thank you’ and ‘Praise God’ in Arabic?” I asked Joani, who is our de factor language expert during this one year trip. “We heard them in Morocco, no?”

We were inside a large mud wall Christina church located in the second largest refugee region in the world. In front of us were two young black Africans musically shuffling their feet, twisting their bodies right and left, and lifting their hands up praising God with loud music that can compete with rock concerts. What struck me so amazing was that they were singing in Arabic, usually used by Muslims.

“Is every one Sudanese?” I asked the Pastor Anthony who brought us to meet the refugees.

“Yes,” Pastor Anthony replied we stood on top of a small hill overlooking the entire refugee area. “We are all Sudanese. There are close to one million refugees from South Sudan here in Uganda.”

We were amazed how God opened doors and brought us to Arua in northwest Uganda to give us a vision of what He will do among the people of Sudan.

One through one, God connected us

God’s story started in China, with our children’s classmate Jireh who ended up in South Africa as a YWAM staff. He introduced us to Emmanuel, a YWAM missionary in Arua, Uganda, whom Jireh met when Emmanuel was in South Africa for training. Since Emmanuel was in South Sudan getting his visa, he introduced us to a Canadian YWAM staff who has been stuck in Uganda for a year due to COVID-19. Carolyn welcomed us to stay with her during our 6 days in Arua.

Being a Canadian family, we were so surprised and glad to meet and live with another Canadian in the heart of Africa. Carolyn came from the “bush” part of Canada, such that her home has no electricity and running water. She has a can do attitude and dedication to read a book of the Bible 100 times before she teaches it to others. She didn’t mind sharing her bed with Annie or our girls and we had many fun nights talking and playing cards together. While we were there, she was teaching the book of Romans to YWAM staff at the Arua Base Camp. Our family were so excited to sit in her class and it has such impact on Olivia and Joani that they read the entire book of Romans out loud in one setting and wrote down their learnings.

At Carolyn’s place, we got to know a Nigerian missionary Michele who “lost” her family when she converted from Islam to Christianity. Instead, a Chinese family in California came to be her new “family”. Next door was Boruha, a Rwandan YWAM missionary, who shared with us the Rwandan genocide from a first-hand perspective. He shared that people from the same church even reported and killed each other. Near the end of the trip, he took us to swim at a waterfall and invited us to Rwanda in the future. Living with her was Victoria, a Sudanese refugee, whom we got to know her story of escape from South Sudan to Uganda.

Through Carolyn, we got to see the YWAM base in Arua. We were surprised at how large and nice the base is. There was a lot of staff from different countries who live there — one, in particular, was William. He was very warm, open, and funny and sat with our children for three engaging hours. He told our children real stories after stories of his faith journeys.

William’s father, who is also a YWAM missionary, currently lives on an island in Victor Lake, Kenya. William connected us to his father who welcomed us to visit him in Kenya. So God continued to connect us one through one as we continue our journey of faith to the next country.

Serving in the Refugee Camp

Our main purpose in coming to Arua was to understand what God is doing in this second-largest refugee area of the world. Fortunately, Emmanuel connected us to Pastor Anthony, who started many churches inside the refugee camp.

Pastor Anthony was captured at the age of 9 to be a child soldier by the South Sudan rebels. After training for 3 years in Ethiopia, he became the personal bodyguard of the South Sudan president. To become the bodyguard, he had to endure having to put an egg on top of his head and to have someone shoot the egg off his head three times! After the president was assassinated through a plane crash that he was supposed to be on, he came to know God while he was in prison. Afterward, he went to Bible school and became a pastor in South Sudan. In 2016, to escape the civil war in South Sudan, he came to Uganda and continue to work among the South Sudanese in the refugee camp.

We were excited to attend the church in the refugee camp and get to really understand the situation there first hand. I really enjoyed the worship time. One worship leader had such a large smile and joyous body movements that even I couldn’t help but to swing my body.

“And now our visitor will come and share the Word of God with us this morning,” announced the MC at the church in the refugee camp.

After a brief pause, the MC said again, “And now our visitor will come and share the Word of God with us this morning.”

I looked around to see what other visitors were there. But I saw no one.

Then Joani nudged me and said, “I think they are talking to us!”

The day before, Pastor Anthony invited us to pray for the students, pray for the sick, and give our testimony during the service, which did. I had gone up to share our testimony that we started our traveling in 2008 in order to rebuild our family. I encouraged them from Malachi 4:6, “That God will turn the hearts of the parents to their children; and the hearts of the children to their parents”, which is a crisis in Uganda with so many fatherless children. None of us were prepared to preach.

Amazingly, God spoke to Annie that morning about Isaiah 43, so she got up and preached Isiah 43 straight from her heart:

Annie then asked the congregations to read the verses aloud and to insert their own name into the verse. It was very simple, but powerful.

In the afternoon, we were invited to join a youth worship gathering from 14 churches in the refugee camp. We were also asked to give a music presentation from China. The place was so packed such that all the floors, doors and windows were full of youths. The South Sudanese really know how to move their body and feet in their worship dances. The music was way too loud. The joyous atmosphere was equally loud.

Then we went up as a family and taught the Chinese song, 一切歌颂赞美，都归我主我的神 to all the youth. We got them to sing the part 赞美主、哈利路亚 (Praise the Lord, Hallelujah) together with hand and body motions! Afterwards, Olivia bravely went up and share her testimony of “And the Story Continues…” in front of close to 1000 youths.

Although we weren’t able to go to South Sudan, but God brought South Sudan to us! We were able to share with them God’s words, pray for them, and danc with them. Praise the Lord!

Since two years ago, I have been involved in a social enterprise called, R2Social (www.r2social.com), with a vision to see refugee talents recognized, maximized, and transformed through online work. It’s first location with the refugees in Uganda so I had the privilege to visit R2Social’s on the ground training partner, Community Development Center (CDC), in Arua.

I was amazed at the projects CDC have done, such as “One Truth”, which is a SMS and digital network to stop misinformation among the refugee for peace building (www.hagigawahid.org). CDC also started refugee story telling through Virtual Reality and a radio program via flash memory cards to build community among the refugees. Together, R2Social hopes to facilitate CDC to build a “Tech Tent” to train qualified refugees in software development. R2Social then can connect these refugees to overseas jobs online through Its “deep job platform”.

While in Arua, I represented R2Social and met with CDC, Office of Prime Minister, UNHCR, and the refugee camp commander. It is my prayer that R2Social will continue to grow and bring transformation to these refugees who are no longer statistics but faces of people that I have come to know and love.

Peace on Earth, Good Will to Men

At the refugee camp, a refugee explained that in 2016, although most people in South Sudan are Christian, the dominate tribe in South Sudan, Dinkas, fought with all the other tribes for power. Tribes fought against each other and killing innocent men, women, and children. Escaping to Uganda was a dangerous trek as rebels from the bush would come and kill indiscriminately.

The distrust among the tribes continues even in the refugee camp. When there are rumor of tribe killings in South Sudan, the refugees living in Uganda would seek revenge among the refugees there.

“All the vice-presidents representing different tribes are Christians,” a South Sudan refugee lamented. “If only they can act like Christians then there can be peace for South Sudan.”

When leaving the refugee camp, I planted a symbolic mustard seed there with the hope that God’s kingdom will come to the South Sudanese in the refugee camp as it is in heaven.

Dear God, may you bring peace on earth and goodwill to men here in Arua. May you change their hatred to love. May you bring hope out of their despair. Amen.

One thought on “We Worshiped in Arabic!”