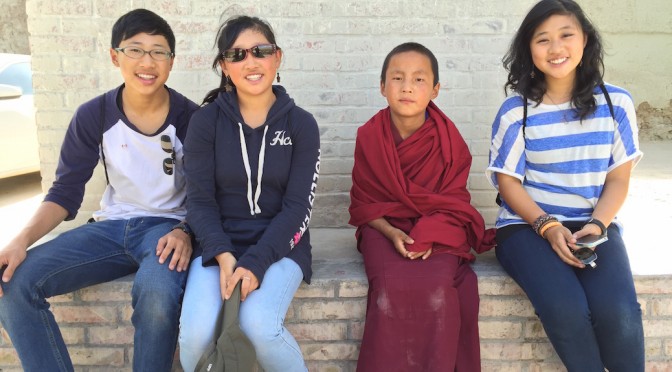 “Why is that old, hairy goat on the road?” Joani asked surprisingly while walking towards the hostel we had booked with a big backpack on the back and a small one on the front.

“Doesn’t it looks like the goat in the ‘Sound of Music’ musical!?” Olivia exclaimed, having acted as the youngest child in her high school play.

The goat was not tied to a rope but roaming free in the middle of the city road at Xiahe, Gansu. The next day, we saw the same long hair goat again lying down next to the busy touristy Labrang Tibetan Monastery next to another white hair goat. We became even more curious.

“Do you know why are there two goats wandering around the town? The long hair goat was mean and grouchy but the white hair goat was so cuddly,” I asked a Canadian Tongka artist Kristel who had lived in Xiahe town for more than 3 years.

“These two goats were set free instead of being butchered for good karma by some Tibetan. There is a string attached to them as a sign that they were spared and so that no one tries to capture them. So now they just roam around the town,” replied Kristel.

“They are like the town’s pet goats!” laughed Annie.

Prior to this funny incident, we slept on the train coming from Mongolia for 3 nights before arriving at Lanzhou, the capital of Gansu and the start of the Silk Road for most travelers. Lanzhou was a good rest stop for us after traveling for more than 3000 kilometers on the train right after our camping at the pasture at the Nadaam. Bao Yu, our couchsurfer host in Lanzhou, was very gracious to let us stay in her cousin’s new apartment and shared with us her many amazing adventures in India and Middle East. She brought us to one of the best night market we had been in China and would not let us pay for many of the food she ordered for us. There we ate our long anticipated boiled whole sheep head, with all the bells and whistles, from eyeballs to nose to brain.

While in Lanzhou, we went to Gansu Provincial Museam.

“You can’t come in,” said the guard to Joani.

“Because you do not have shoes.”

“Flip flop is not okay?”

“She is just a child. Can’t you just let her in?” I pleaded.

“You can go to the street market 200 meters down and buy cheap shoes then come back.”

We discussed as a family and Joani proposed that she can stay outside (watching her favorite American’s Idol TV show) and then either Olivia or Annie will switch shoes with her. While inside, Olivia took at quick look at the exhibitions and felt that it was of great quality and worth for us to hire a museum guide which costed RMB100 for around 1 hour. But it would be even better if Joani can listen as well. So I took a chance and told the tour guide that my youngest daughter was waiting outside because she didn’t wear proper shoes. Surprisingly, the tour guide offered her own spare high heel shoes for Joani to wear. Joani’s eyes opened wide when she saw the high heel shoes because she often looked forward to the day when she can wear high heels. Now she was wearing one!

We went through two exhibition halls, the Silk Road Hall and the Buddhism Hall. We chose these two because we know that along our travel through Qinghai and Gansu, we will encounter these two themes the most often. The tour guide was very patient in answering our myriad of questions as we were not familiar with many of the historical and religious terms in Chinese. We how the ruling staff, and many other artifacts, in Gansu was very similar to the ruling staff in Central Asia and Middle East, showing that there were commerce trading for thousands of years already. We saw how China traded silk, porcelain, compass, paper, gun powder, etc. to the West while the West traded walnut, carrot, cucumber musical instruments, Buddhism, Christianity, etc. to China. At the Buddhism Hall, we learned that the gods of Tibetan Buddhism tend to be fierce, scary, and harsh while the buddhism followed in China tend to emphasize more on mercy to others.

After 2 nights of good rest in Lanzhou we began our Tibetan segment of our trip through the southern Gansu province and east Qinghai province. This was not originally planned as we had already booked 9 days tour of Tibet. Due to the big earthquake in Nepal in April, the border between China and Nepal was devastated and the tour agency called me saying that it might not be open for a year, resulting in us canceling the tour. As a substitute, I added this Tibetan segment for the children to better understand the Tibetan people and religion.

“The Yak Yoghurt is so creamy here. I love it.”

“Strictly speaking, Tibetan do not call them ‘Yak” yoghurt but ‘Di’ yoghurt because ‘Yak’ means male cow in Tibetan and bull does not produce milk!” explained Martina, a couchsurfing host we contacted in Xiahe, Gansu.

Martina was not able to host us but she was very kind in helping us to book a hostel and having lunch with us to answer all our questions. She even lnvited us to her Canadian friend, Kristen’s home for tea, where we saw Kristen’s amazing paintings and met Kristel’s Tibetan husband. Joani was ecstatic when Kristel autographed and gave her a copy of her drawing book.

“Why do the Tibetan wear their jacket with one arm sticking out?”

“In the past, it allow them better movement for shooting arrows. Now they stick out their arm when it is hot as they wear the jacket all year round. Do you know that the monks are not suppose to wear sock since their clothing custom was passed down from India which is not cold? One way to keep themselves warm is to wear boots with animal fur lining.”

“Why are there round circles painted on top of the walls in those houses?”

“Those represent beads that Tibetan wears and is usually painted in monasteries. Now, to attract tourists, many hotels also paint those round circles but some Tibetans are offended by them.”

“Why do these people spin the prayer wheel as they circle the monastery?”

“There are prayers written on the wheels. Spinning them represents praying those prayers.”

“Why are people keep circling the white stupa?”

“Usually there are bones of important religious monks buried inside those stupa. Tibetan usually circle at least three times as ‘three’ is a auspicious number for Tibetan.”

“But many kept circling and circling for a long time?”

“Well, the more circles they more pious and the better the karma.”

The children and us kept bombarding Martina and her friend Kristel with questions after questions. There were so much about the Tibetan’s religion and way of life that we did not know until we actually saw them living their daily life around the huge monastery complex. We realized that reading facts from books does not stimulate our mind in the same way as when we see, touch, and hear in person. Somehow being there triggered an eagerness to ask more questions and to want to understand more.

After Xiahe, we took a four-hour bus ride to Tongren, another famous Tibetan city famous for its Tongka art works. On the way we passed through 3600 meter high Tibetan-Qinghai plateau. The sceneries of green pastures with sheep and yaks scenery along the way was straight out of the children’s Chinese textbook. I didn’t sleep the whole time just taking in everything. The bus stopped by a small town perched on a hill overlooking the pastures for some yoghurt that was the best we had tasted so far.

At an old mud walled monastery outside the Tongren city, I had a chance to speak to a monk at length since we were the only tourists there, a strange phenomen in China and the first time it happened to us this trip.

“How did you become a monk?”

“I came here after finishing junior high because I knew I wasn’t able to continue to high school and the monastery allowed me to learn many things.”

“How long have you lived here?”

“What does such a young monk learn here?” I asked the monk while eyeing a young monk no more than 8 years old.

“He learns to read and recite from buddhism text, studies Tibetan and Mandarin languages, and other subjects.”

In my mind I was pondering the contrast between what our family is doing and what this monk had done. For us, we want to learn many things through seeing the world and seeing how people live and think. For the monks, they learned by staying at the same monastery for years after years learning through reading and listening.

“I saw some Tibetans circling the monastery by taking 3 steps then prostrating on the floor, then taking another 3 steps and prostrating again,” Nathan shared about his most memorable moment in the Tibetan plateau. “They are more devoted than I can ever be but what if they are worshipping the wrong god?”

“For Tibetan, they show devotion by spinning the prayer wheel, prostrating on the floor, burning juniper branches, counting the beads, and circling monasteries and mountains,” Annie reflected. “For Christians, we show devotion by loving our neighbors.”

After Tongren we rested at Xining, the capital of Qinghai, for a day in a very friendly and generous couchsurfer host Yong’s family home, then camped at the magnificent Qinghai Lake, the largest in China, at 3300 meters high. The sunset and the rapseed flowers there were beyond description. Overnight, the snow blanketed the hills next to us creating a color layers of white, green, yellow, and blue sceneries. Then we ended our Tibetan excursion when we left Xining towards Zhangye, the continuation of our Silk Road adventure in Gansu, China.

3 thoughts on “Why is that old, hairy goat on the road?”