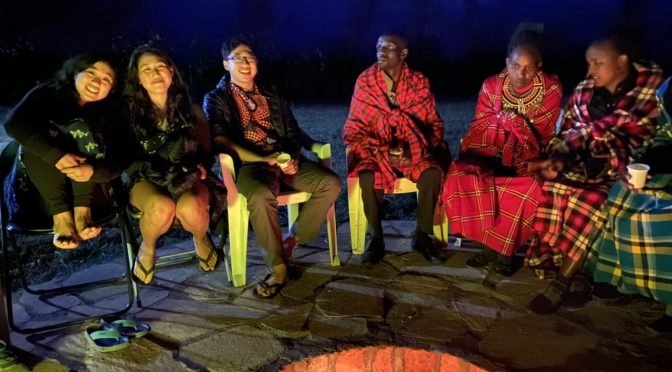 Maasai Tribe has always fascinated me — ever since I saw them jumping straight up and down ceremonially on television. How to have an authentic experience with the Maasai people became my goal as we crossed from Uganda to Kenya.

William, a missionary in Arua, Uganda, suggested for us to visit his parents in Mfangano Island in Lake Victoria, who can then connect us to potential hosts in the Maasai area. It seemed like a roundabout way but we felt that God is connecting us from people to people so we need to trust what God is doing.

So after praying as a family, we decided to go on this adventure of trust our next step to God. First stop, Mfangano Island!

Getting to Mfangano Island

Just getting to Mfangano Island took us three whole days!

We first took a three hours van to Jinja for an overnight stay, then at 5 am, took a three hours matatu (van taxi) to the border town of Busia. After crossing the border, we took a bus for another 5 hours to the edge of Lake Victoria at Luanda K’Otieno Pier. There, we took a ferry to Mbita where we had to spend another night. On the third day, we missed the morning ferry to Mfangano Island so we had to take a large wooden boat full of cargo to the island, which took several hours under the scourging sun as it stopped in different ports to offload cargo. It even stopped few times to pick up large dead white perch that floated on the surface.

After reaching Mfangano Island, it took a while to negotiate with 5 motorcycles to take us to the top of the island where our hosts live. The motorcycle ride took 30 minutes on very bumpy dirt road that goes up and down along the edge of the island then climbing high to the very top.

Of course, during this three-day journey, we were mostly accompanied by either the mother Catherine or father David of William who gave us this opportunity to see his missionary parents.

Sitting Under the Mango Trees

Our 3 nights on the island was quite relaxing. They cooked us three meals a day and all we did was to enjoy the different dishes of fish, chicken, beef, etc. The place had no electricity so every night we enjoyed the wondrous display of stars in the dark night sky and flurries of fireflies that surrounded us.

We lived in a cluster of houses where everyone is a relative of each other. David’s father had several wives so one can imagine how big and complex is this clan that we stayed in. I have never seen so many mango trees all together. One of the most enjoyable time each day is when our family would sit under the mango tree, eating its fruit, and just talk and laugh together. I told my children that one of my father’s happiest memory was eating mango with with his grandfather.

During the three days, we would visit different neighbors to pray for them. We also planted a symbolic mustard seed at the highest point on the island to bless all the people and countries (Uganda, Kenya, Tanzania) that surround this biggest lake in Africa, as well as being the source of the Nile. One afternoon, Annie and I gave our testimonies at the church. After sharing, everyone shared how our messages impacted them which was one of the few times we got to hear the impact of our messages.

Three nights passed quickly. However, the connections from Pastor David were working out as none of them works directly with Maasai people. I didn’t know where to go next. After much prayer, we decided to head towards a city called Narok which is in the midst of the Maasai land.

Heading Where We Know Not Where

“Give God the right to direct your life, and as you trust him along the way you’ll find he pulled it off perfectly!” Psalms 37:5 TPT

After hiking down the mountain for 2 hours, plus a motorcycle ride, and a ferry ride, we spent another night at Mbita to take a 6 am bus to the city of Narok.

Even as we headed towards Narok on the 6-hour bus ride, we had no place to stay and don’t know what we will do when we get there. This is the first time I have experienced this in my travel. Annie and the kids reassured me that God will open a door so don’t worry.

The night before I found a workaway opportunity in a Maasai school. However, I wasn’t able to contact the host as my workaway account was shut down. I searched the name of the school, Building Hope Academy, on the internet and found an email address to which I sent my request but had not received a response yet.

So it is with such anxiety that I sat there in the bus towards Narok and with such excitement when I received a call!

“This is David from the Building Hope Academy,” the caller on the line spoke. “I will be waiting for you at Narok to bring you to the School.”

God is good! He pulled it off perfectly.

From having no place to stay and nowhere to go, we were in a safari jeep heading to a small village school that was founded by David and supported by a Canadian foundation. Julie is the house mom for volunteers.

An International Fellowship of Travelers

“So are we the only volunteers right now?” I asked David feeling somewhat confident given our experiences so far.

“No, we have 6 volunteers right now and adding the five of you, that would be 11 volunteers!” replied David. “They are from Romania, Brazil, France, and Pakistan.”

We were very surprised yet very excited as we rarely got to meet other backpackers during this one year trip. The guest house has only 4 rooms so our family slept in 3 large tents in the backyard. After sleeping 5 people in a small tent, sleeping 5 in 3 large tents wasn’t so bad!

We quickly got to know the other volunteers. Catalina is a Romanian and a private jet stewardess working in Saudi Arabia. Bia was a Twitter marketing guru who quit her job and has been traveling for 1.5 years already. The three Pakistani fun-loving girls (Fatima, Neha, and Mariam) are college friends who study online. Fredrick was a French baker who decided to travel the world.

During our week there, half of the joy, were just laughing and spending time together with the other volunteers. We went on a foot safari to see zebras, we cooked together, and we shared food together.

There are around 250 students who are Maasai at the Building Hope Academy from kindergarten to 6th grade. We each get to pick a grade that we want to be part of and the teacher will ask us to help out whenever appropriate.

I decided to stay with the fourth grade class. They were all very eager to learn and to participate in classroom activities. Besides checking their class work, I also helped to teach math, science, English, physical education, and foreign language. I couldn’t believe my eyes when I saw that one of the foreign language for them to learn is Chinese! So I taught them the four tones of Chinese which was a lot of fun.

Every Friday afternoon, the school would gather all the students together to have music and dance. There we followed them in their traditional Maasai dance steps, where they walk in a line twisting their head, neck, and body to the music.

On Saturday, we headed to their Saturday market about 4 kilometers away. Everyone there were Maasai people and they all wore their traditional clothings and jewelries. We found a butcher shop that cooked some of the best lamb meat. The animal market was also a unique place to observe them in their usual day-to-day living. It was there that God brought an angel to us. Her name is Mary.

Mary was selling jewelry and she was very articulate in English and shared many things with us, including her faith in God. We quickly bonded together, especially with Joani. She brought us to few villages where there are still traditional Maasai houses made of mud roof, wall, and bed. It was dark inside but it is like a fully furnished apartment with several bedrooms, kitchen, and even an animal quarter. Before we left few days later, she even made a bracelet for each of us with our name.

We also got to see some Maasai men dressed in their hunting outfit, together with orange hair, spear, and shield. We were fascinated and tried to stalk them but they didn’t seem friendly. Later, we found out that every Maasai boy needed to go through few months to few years of “training” to be a consider a real man. They would live apart from their family and be a “warrior”, which is to protect villages and in turn live off the food from the villagers.

That same Saturday, the founder David, suggested having a party among the teachers and volunteers. The highlight was the slaughter of a sheep for the meal, which was only around USD60 for the sheep. One sheep was used to cook stew, BBQ, stir fry, and a special dish where the blood of the sheep was cooked with the meat for a very flavorful and saucy dish! Throughout the evening, we were eating and dancing. All the teachers wore their traditional Maasai outfit of a red shawl and men would carry wooden sticks.

Six days passed quickly and it was time to say goodbye. Looking back, my faith was strengthened because like what Psalm 37:5 said, “As you trust Him along the way you’ll find He pulled it off perfectly!” I don’t think I could have planned this week any better than this. It was the most perfect plan that I had without any planning.