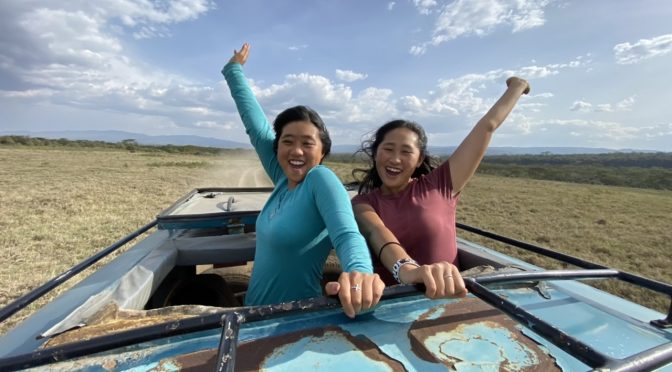 “We have already done a once-in-a-lifetime safari in South Africa,” I protested against the children. “Plus, park entrance ticket in Kenya is very high.”

“But we didn’t any in Uganda. And we go to Masai Mara. We should at least go to one in Kenya,” pleaded Joani.

“I guess we never had a safari with an open roof top!” I announced to the family. “that would be a new experience for all of us.”

Lake Nakuru National Park, 3 hours north of Nairobi, is one of the most popular National Park in Kenya. It used to be famous for millions of flamingos but with the rising of the freshwater, most have flown to somewhere else.

However, for me, it was a walk down memory lane as I went there when I was only 27 years old on my first around the world trip. I went there solo to meet an old friend Pastor Angus and he took me to the NP. Now I am bringing my children here when they around the same age as me.

The children couldn’t wait when the rooftop was opened. Indeed it feels very different to be standing several meters high instead of boxed in by a square window. We saw a 360-degree view of zebras, buffalo, waterbucks, giraffe grazing the grass under the early morning sun. There were also many warthogs, hyenas, jackals, vultures, etc. I didn’t realize that when warthog runs the tail sticks right up like a flag pole!

Half of the fun was just letting the wind blow through our hair as we stand and blast the music riding the safari jeep.

The animals didn’t disappoint us either.

We saw a rhino for the first time and it was really close. Zebras galloped next to our jeep. Pelicans gracefully flew in up-down wave formation. A waterbuck splashed as it ran across the shallow lake. There were also enough hundreds of flamingo at one corner of the lake to make it look a little pink.

Right before leaving the park at the end of the long 12 hour tour, we even saw 3 lions sleeping in the midst of tall bush!

On our way back to Nairobi, we decided to spend one night at Lake Naivasha, famous for its hippos.

The deciding factor was that we get to see hippos from a boat instead of from the land, which would be a new experience.

It took a long time to bargain with the boat middleman to get the price to a more “local” price, which at the end was USD 20 for a boat for an hour. Plus I was not feeling well at the time.

After getting on to the boat, the boat captain was very easy going and even gave us bonus time of 30 minutes. There were many waterbirds and large pelicans almost close enough to touch. But what got us really excited was seeing the hippos.

It was the tiniest hippo we have seen as it swam next to the mother. We kept asking the boat captain to get closer but we can tell he was trying to keep a good 10-meter distance to the nearest hippo in case the hippo wants to flip the boat.

“Do you see something there?” the boat captain pointed at the crescent island in front of us. “Let’s go there.”

We couldn’t see even with the binocular so we didn’t know what to expect. As we got much closer after almost 10 minutes on the boat, we saw 3 giraffes grazing on the side of the island. It was the first time we saw a wild giraffe on an island.

After the boat ride, we were told to eat the lake fish at the side of the road so we did. But the driver was waiting for us so we had to take out and bring it back to our Airbnb to eat.